Lightspeed is the name of several fictional characters in the various Transformers series. Some English dubs of the Transformers: Victory animated series use the name Lightspeed for the character of Braver.

The first Generation 1 Lightspeed is a Technobot that forms the left leg of Computron or right leg of Volcaticon. Despite his popularity and blazing speed as a car, he longs to be converted into an interstellar spacecraft.

When Maximus' forces linked up with the Earthbound Autobots, they encountered resistance from Autobot leader Grimlock, who was unhappy they might resurrect Optimus Prime and topple him.

The Technobots were last seen trying to stop the Underbase powered Starscream in issue 50, as they were all taken out and deactivated. The Technobots were never seen again in the U.S. Marvel Transformers series. While they may have been destroyed by Starscream, many of the other characters he disabled in that issue eventually returned to the series. 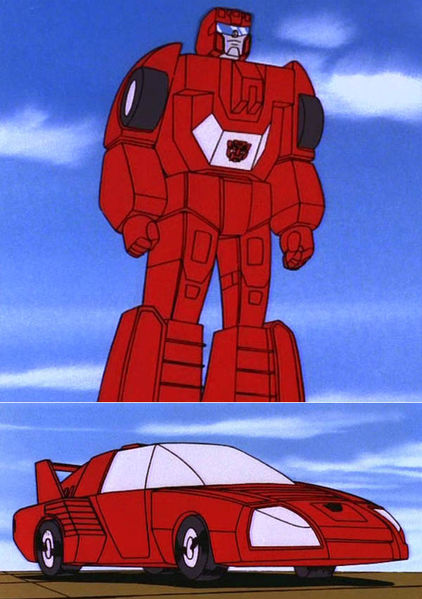 Lightspeed in The Transformers

The Technobots first appeared in the season 3 episode "Grimlock's New Brain". After biting through a computer's cables located inside Cybertron's core, Grimlock became super-intelligent, and created the Technobots to combat the Terrorcons. The Terrorocons combined into Abominus and to combat him, Grimlock transferred his vast intellect into Computron, the Technobots' combined form. This left Grimlock in the same mental state as before. Like Omega Supreme, Computron speaks only in suffixed phrases, taking the form of "analysis: conclusion." However, unlike Omega, Computron often combines shorter suffixed phrases (such as items or datums) as variables in a larger problem, and seems less concerned than Omega with vocal economy.

During "The Return of Optimus Prime", they tried to stop the Terrorcons from stealing a special heat-resistant alloy. The two teams merged into their combined forms, but Computron's need to analyse every strategy before committing himself led to Abominus swiftly defeating him.

The Technobots also appeared in the Season 4 episode "The Rebirth" part 1. They were on Earth when the Decepticons attacked Autobot City. Mindwipe took control of Lightspeed and forced him backwards using only his mind.[1]

Lightspeed appears in episode #27 of the Japanese Headmasters series, called "The Miracle Warriors - The Targetmasters (Part 1)." Spike orders the Protectabots, Technobots and Trainbots to destroy the abandoned Decepticon headquarters on Earth. Combined into Defensor, Computron and Raiden the Autobots quickly demolish the building.

Although Lightspeed and the other Technobots received individual biographies from Dreamwave they did not appear in any fiction before the company went out of business.

Jetfire and the Technobots appeared working together in IDW Publishing's comic book miniseries, The Transformers: Stormbringer. They investigated a mysterious energy spike on the deserted surface of Cybertron. Jetfire, Lightspeed, Scattershot and Strafe went down to the surface to investigate, but were ambushed and taken out by Bludgeon's troops. Nosecone and Lightspeed's ship was shot down, but they managed to launch a distress beacon first and get to an escape pod. The three captured Technobots were cannibalized for their parts, while Bludgeon revealed his true pan—to reanimate Thunderwing. Nosecone and Lightspeed were left on the surface on Cybertron, and were about to be killed by Centurion drones when help arrived—the Wreckers, who saved them both. The Wreckers subsequently attacked Bludgeon's cult, and rescued the Technobots. They then helped Jetfire to decode Bludgeon's data, helping shut Thunderwing down for good. It is unknown if the Technobots can merge into Computron at this point.

The Technobots are a favorite toy of the character Lucas in the book The Annoyance Bureau By Lucy Frank.[2]

Knockoffs of this toy were commonly released in a gift pack containing a mixture of Terrorcons and Technobots who formed a bizarre Abominus/Computron hybrid toy.[3]

A gift pack of figures that combine into Computron.

A gift pack of figures that combine into Computicon.

The first Generation 1 Lightspeed is a member of the Motorvators.

A redeco of the Brainmaster toy Braver, minus the combining parts.[4]

This character is one of Optimus Prime's evil Autobots, but secretly loyal to Alpha Trion.

Computron was created as a combiner for the Autobots. Although the individual Technobots are all geniuses in their fields, when united they formed a highly ambitious super genius called Computron who suppressed all their individual flaws. In his arrogance Computron attempted to grant enhanced intelligence to Grimlock. The experiment backfired and it brought out the flaws in each Technobot, resulting in insanity for Computron. Optimus Prime enjoyed the new Computron and refused to repair him. Alpha Trion was then able to sway Computron to his side.[5]

The Technobots are among the acolytes of Alpha Trion who respond to his return to their world.[6] When Breakaway, Landquake, Skyfall and Topspin escape Alpha Trion Scattorshot offers to have the Technobots hunt them down, but Alpha Trion instead assigns them to help relocate his base.[7] The four rogue robots are eventually uncovered by Computron. Although Computron chases the quartet, they escape to the Decepticon Headquarters, and Computron faces off against Abominus.[8]

No toy has yet been made for this version of Lightspeed. He is depicted as looking similar to the Generation 1 character, but colored like Generation 1 Blot.