From WikiAlpha
Jump to: navigation, search
For other uses, see Hardhead.

Hardhead is the name of two fictional characters from the Transformers series. The first is an Autobot Headmaster.

Hardhead is a fictional characters from the Transformers series introduce din 1987. He is an Autobot Headmaster who turns into a tank.

The only way to get him to follow advice is to persuade him to come up with the idea himself. Stubborn, doesn't talk much. Binary-bonded to Duros, a Nebulan who loves a battle as much as he does. In tank mode, maximum speed: 155 mph. Range: 450 miles. Has 120mm laser-guided gun that shoots incendiary, sonic and explosive shells. In robot mode, has 2 shatterblasters that shoot diamond-hard shards.

Decepticons successfully stole the key to the Plasma Energy Chamber and opened the ancient device, a group of Autobots and humans included Hardhead were blasted across the galaxy by the energy release, crash-landing on the planet Nebulos. Quickly siding with a group of rebels engaged in a war against the planet's evil rulers, the Hive, they deduced a process by which they could combine the best of their minds and bodies together, becoming Headmasters. Hardhead was paired with Duros, a Nebulon rebel who likes combat as much as he does. 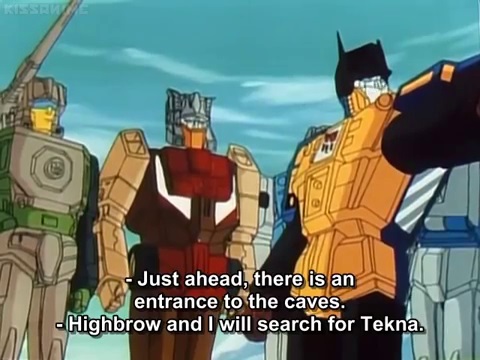 Whereas "The Rebirth" served as an ending for the cartoon series in the west, in Japan, it was decided to continue producing new episodes. To that end, "The Rebirth" was discarded, and in its stead, a new 35-episode series titled Transformers: Headmasters was created, along with a new Japanese concept for Headmasters which differed distinctly from their Western counterparts. There would be no Nebulons or humans here - instead, the heads were small Cybertronians, and the bodies were lifeless constructs called "Transtectors" to which these small robots connected themselves, and which they controlled. Although the Japanese toyline, like the West, gave the Headmaster components different names to the larger Transtectors the animated series used only one name for both the head and the Transtector.

Four million years ago, Fortress was the leader of one of the many groups of Autobots who fled Cybertron to escape the wars. Things took a turn for the worse, however, when their spaceship crashed on the planet Master, the harsh environments of which killed many members of the crew. In order to survive the dangers inherent to life on Master, the Autobots created the lifeless bodies known as Transtectors, and underwent rigorous training to master the transformation technique and merge with them. Their training also allowed them to developed considerable mental powers such as telepathy and telekinesis.

However, a member of the group known as Zarak chafed under Fortress's leadership, and he and three of the Headmasters loyal to him turned on him, only to be defeated and forced off of Master. Zarak subsequently teamed up with Decepticon leader Galvatron, and when they attacked Cybertron in the year 2011, Fortress and his men - Chromedome, Brainstorm, Hardhead and Highbrow - returned to their home planet aboard Fortress's battleship, Maximus, and joined the war once more.

Hardhead is among the Autobots who appeared in the 1988 audio book Decepticons at the Pole by John Grant.[1]

Hardhead is among the Autobots who appeared in the 1988 Ladybird Books story Autobots Strike Oil by John Grant.[2]

Hardhead appears in the 2013 Transformers: Timelines story Termination, where he is assigned as a city commander by Obsidian.[3]

Hardhead would make his first IDW Publishing appearance in The Transformers: Escalation as part of the reinforcements summoned to counter Megatron's ore-13 enhanced Decepticons. He and Hot Rod insisted on heading down to Earth to assist Prime's unit against the Decepticons as soon as possible - just in time to save Prowl from Astrotrain. When it appeared as if Megatron had killed Optimus Prime, Hardhead angrily blasted the Decepticon leader - only for his blasts to do nothing. On Prime's orders, he and the other Autobots focused fire on Megatron long enough for Prime to recover and drive off the Decepticon leader, although they were prevented from dealing a killing blow by the appearance of Skywarp and Thundercracker.

Hardhead joined Fortress Maximus's expedition in search of a peaceful world upon which to live. Hardhead was among the Autobots who joined Fortress Maximus in leaving Cybertron for the planet Nebulos. Hardhead was among the Autobots who gave up their heads to the Nebulans in hopes of showing their peaceful intentions (Transformers: Headmasters #1). However, when the Decepticons followed them, Hardhead became a Headmaster in order to stop them.

While the U.S. Headmasters miniseries would not feature Hardhead in anything other than minor roles, the UK series would feature him more. One of his most prominent actions in this period was when he and the other Headmasters were captured by the Decepticons in order to refine their own Headmaster process. Taking Highbrow, the Autobots managed to free the other captured Targetmasters, with Hardhead assisting in routing the Decepticons and freeing Highbrow. (Transformers Marvel UK #130-131)

Hardhead made his first appearance in issue 38 of the regular Marvel Transformers series, joining the Earthbound Autobots, appearing less.

He last appeared in issue 75 during the battle with Unicron. He was apparently killed, along with the Decepticon Bomb-Burst, when he was crushed by Unicron while trying to activate a missile battery.

Hardhead appeared in the unlicensed mini-comic released for the 2011 TFcon, called "Changes in War". This story is set on the planet Master before the events of Transformers: The Headmasters. Hardhead is among the Autobots who try and fail to stop Scorponok and his allies from escaping.[4]

Hardhead and Duros appeared in the Transformers: Mosaic story "The Sting of Scorponok" by Josh “Richter” van Reyk.[5]

This toy came with his partner Duros, and converts into a Cybertronian tank.

A Walmart exclusive release, this figure is a green recolor of Universe Ultra Onslaught, which transforms into a 6-wheeled assault truck.[6]

Hardhead was the name of a Predacon who served under Magmatron in the Beast Wars Neo line.

Hardhead is depicted as a dumb but tough warrior who must constantly be ordered around to keep him in line. He is portrayed with low intelligence. Hardhead has a tough time even staying on task long enough to finish a sentence. He can be easily fooled and needs to be constantly reminded of exactly what he’s supposed to be doing.

In Beast Wars: The Ascending Shokaract's heralds Hellscream, Max B, Antagony, Thrustor and Hardhead defend their master on Cybertron until he is shunted into limbo by the Maximal Snarl. The heralds then retreat once there was no vessel for Unicron.

Hardhead has a biography printed in the Beast Wars Sourcebook by IDW Publishing.[7]

His toy was a remold of the toy first used for Beast Wars Dinobot, and was later recolored as Beast Machines Dinotron. He was sold by himself and packaged with the Maximal Sharp Edge.

Shattered Glass Hardhead is a evil mirror universe counterpart of the Generation 1 character.