From WikiAlpha
Jump to: navigation, search
For other uses, see Highbrow.

Highbrow is the name of three fictional characters from the Transformers series. The first Highbrow is an Autobot Headmaster introduced in 1987.

Profile: Highbrow considers warfare a barbaric solution to problems, worthy of only the most primitive sentient creatures. He believes civilized folk should talk about their differences, a talent for which he seemingly has an endless capacity. Hardhead claims that Highbrow's voice box burns enough fuel by itself to power all the Nebulan Autobots for a year. Although that is doubtful, Highbrow does talk a lot and uses a lot of words that nobody understands. Even Chromedome often finds himself fruitlessly searching through his extensive vocabulary. Highbrow considers himself intellectually superior to the Nebulans and other Autobots. They think he's a self-righteous snob. Highbrow's biggest disappointment in life is that circumstance has forced him to lower himself to participate in the very activity he most loathes - fighting.

Gort, Highbrow's Nebulan partner, is quite a contrast. He's a cheerful young man with never an unkind word for anyone. Spurred by concern for protecting his planet, he overcame his working-class origins as a stable boy for an exclusive Nebulan country club that catered to the aristocracy to join the elite ranks of the Headmasters. He is much admired by his comrades for his earnestness, common sense and courage - except for Highbrow, who finds it a humiliating, humbling experience to be binary-bonded to such a commoner. Young women all over Nebulos are attracted to the boyishly handsome hero, but Gort remains steadfastly faithful to his long-time girlfriend, Marita. Gort is the All-American boy of the Nebulan Autobot Headmasters.

Abilities: In helicopter mode, Highbrow has twin three-bladed rotors that enable him to lift up to 22,000 pounds of cargo, and, with the help of two small vectored-thrust turbofan engines, reach a maximum speed of 1200 mph. More accurately, Highbrow's designation is a jet helicopter. He's packed with equipment designed to detect, monitor and record enemy communications; target-indicating radar whose signals can be relayed to ground stations; magnetic, infrared and audio sensors for detecting enemy robots and vehicles; and a variety of anti-detection systems to protect himself. His range is 800 miles. In robot mode, Highbrow uses two acid rainmaker rifles, which shoot streams of highly corrosive acid.

Weaknesses: Sometimes the thrust of Highbrow's jet engines overpower his rotors, sending him spinning out of control when in helicopter mode. Also, Highbrow's deep resentment of being controlled by Gort makes him less than cooperative at times. 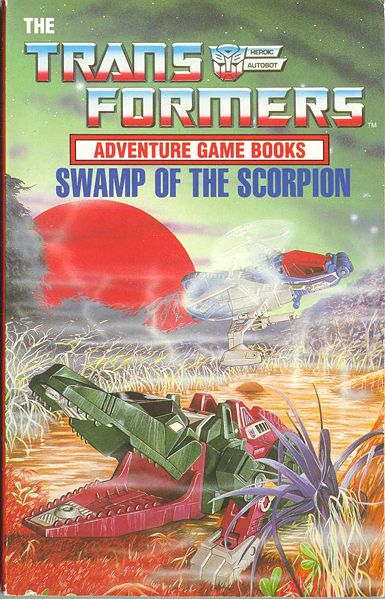 Swamp of the Scorpion cover

Highbrow appeared in the 1987 Corgi Book story Swamp of the Scorpion.[1]

Highbrow is among the Autobots who appeared in the 1988 audio book Decepticons at the Pole by John Grant.[2]

Highbrow is among the Autobots who appeared in the 1988 Ladybird Books story Autobots Strike Oil by John Grant.[3]

Highbrow was among the Autobots featured in the 1988 book and audio adventure Autobot Hostage by Ladybird Books. While on solo patrol, Highbrow is captured by the Decepticon Tentakil. Scorponok sends a message to the Autobots promising to release him if Optimus Prime gives himself up. Optimus Prime surrenders but also smuggles Hosehead and Fizzle into the Decepticon base. As expected, Scorponok fails to keep his side of the bargain but the two Autobots manage to free both Optimus Prime and Highbrow and after a brief battle they make their escape.[4][5]

Spark commands an Autobot shuttle crewed by Blaze, Hubcap, Sideswipe, Streetstar and Windbreaker into space where they intercept a distress call from Spike Witwicky on the planet Nebulos. When the Autobots arrive on Nebulos they meet Spike and Carly Witwicky, Chip Chase and the Autobots Brainstorm, Chromedome, Crosshairs and Highbrow who inform them that the Nebulan scientist Hi-Q is missing. They learn from Hi-Q's assistant Hi-Test that Hi-Q had security monitors and through them discover the scientist was kidnapped by the Decepticons Runabout and Runamuck.[6]

Cloudburst, Crosshairs, Getaway, Highbrow and Stakeout were among the Autobots who backed Optimus Prime when Grimlock challenged him for leadership of the Autobots in the issue #263 of the Marvel UK comics, "Break-Away!"

Highbrow's present-day character model identifies him as a member of the Elite Guard. His vehicle mode was not a helicopter, like his G1 namesake, but a cybertronian vehicle with a pair of tank-like treads and a helicopter-like cockpit. In appearance, Highbrow looks more similar to Kup. He is voiced in the style of the English comic actor Terry-Thomas.

At BotCon 2010, a new toy for Highbrow was unveiled for the 2010 Transformers toy line. He transforms into a WWII-era Lockheed P-38 Lightning.[7]

An all-new mold. Features a battle mask that resembles WWII-era flight goggles. The propeller blades spin by continuously pressing buttons under the engine bays.[8][9]
The mold for this figure is also used for the Asia-exclusive Powerdive in the Transformers: Generations toy line.
This toy was repurposed into the GoBot Bolt.

Shattered Glass Highbrow is a evil mirror universe counterpart of the Generation 1 character.