From WikiAlpha
Jump to: navigation, search
For other uses, see Fizzle.

Fizzle is a name applied to several fictional characters from the Transformers series.

Overloads his circuits with grandiose schemes and cheap fuel. Acts as if his true worth is measured not by what he does, but how much he talks about doing it. If he could run on his own hot air, he'd go forever. In car mode, leaves trails of flame in his path. Capable of going from 0 to 200 mph in 8 seconds. Prone to stalling on left turns. Possesses superior logistics and geographical data banks.

Fizzle was among the Autobots featured in the 1988 book and audio adventure Autobot Hostage by Ladybird Books. While on solo patrol, Highbrow is captured by the Decepticon Tentakil. Scorponok sends a message to the Autobots promising to release him if Optimus Prime gives himself up. Optimus Prime surrenders but also smuggles Hosehead and Fizzle into the Decepticon base. As expected, Scorponok fails to keep his side of the bargain but the two Autobots manage to free both Optimus Prime and Highbrow and after a brief battle they make their escape.[1][2]

Fizzle was among the troops under the command of Spark on Earth.[3]

Spark commands an Autobot shuttle crewed by Blaze, Hubcap, Sideswipe, Streetstar and Windbreaker into space where they intercept a distress call from Spike Witwicky on the planet Nebulos. When the Autobots arrive on Nebulos they meet Spike and Carly Witwicky, Chip Chase and the Autobots Brainstorm, Chromedome, Crosshairs and Highbrow who inform them that the Nebulan scientist Hi-Q is missing. They learn from Hi-Q's assistant Hi-Test that Hi-Q had security monitors and through them discover the scientist was kidnapped by the Decepticons Runabout and Runamuck.[4]

The Sparkabots were regularly used in the Marvel comic after their debut, but this was mainly in the U.K. comic as followers of Ultra Magnus. In the U.S. comic, they rarely appeared and eventually forgotten about; possibly at a request from Marvel U.K. who were using the characters themselves. The Sparkabots usually appeared together as a trio. They were sometimes known as Sparkler Mini-Bots; possibly an early name for this sub-group.

They originally appeared in issues 152 and 153 of the U.K. comic, having been dispatched to Earth to keep an eye on the future Decepticon Galvatron. However, they ended up battling the Firecons, who had been sent by the Cybertron Decepticons to form an alliance with Galvatron. Their battle was interrupted by Galvatron himself, who laughed off the Firecon offer of an alliance, and swatted Sizzle through a tree when he tried to stop the Decepticon.

Later, they managed to free Galvatron's enemy Ultra Magnus, who had been trapped in a volcano with the future Decepticon, until a battle between the Throttlebots and Combaticons had shaken them loose. Magnus had developed a phobia of Galvatron, not helped when the future Decepticon himself arrived to stop them from halting Shockwave's plan to revive Megatron. With Magnus unwilling to fight, the Sparkabots took on Galvatron themselves, and lost badly. However, their courage allowed Magnus to get a second wind and defeat Galvatron, forcing him to flee.

The Sparkabots then returned to Cybertron - and almost immediately got caught up in the mad Autobot scientist Flame's plan to turn Cynbertron into a Warworld. They formed a temporary alliance with the Duocons. Despite Sizzle's reservations, he returned with Trypticon, who helped defeat Flame's army of zombie Autobots. With the Wreckers and Emirate Xaaron, they defeated Flame once and for all.

After this, the Sparkabots helped Magnus close down a ring of deadly alien gladitorial games, clashing once more with the Firecons. This had repercussions in their first US appearance, as the Firecons captured them and the Triggerbots, transporting them to Earth to be hunted by a group of human bounty hunters using Scorponok's jamming devices. After learning of Zarak's true nature the Autobots and humans teamed up to defeat him. After this the Sparkabots did not appear as much. One notable appearance was in a nightmare alternate future where Unicron had destroyed Cybertron and Galvatron ruled Earth. Guzzle was one of the few surviving Autobots. He, Chainclaw and Getaway were to distract Cyclonus and Scourge while the other Autobots and humans sabotaged Galvatron's secret weapon. Sadly Guzzle paid the ultimate price, as Cyclonus smashed through his chest with one punch, killing him. 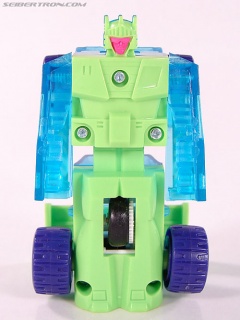 A new mold. Came with no accessories. This toy was recolored into Generation 2 Blaze.

A recolor of Generation 1 Fizzle, this toy was repurposed as Fizzle.

Fizzle is also the Japanese name of Flamefeather.