From WikiAlpha
(Redirected from Kup)
Jump to: navigation, search
For other uses, see Kup.

Kup is the name of three fictional characters from the Transformers series.

Profile: Kup, as in Pickup Truck, is an old warhorse. A grizzled Autobot veteran with ten thousand tall tales from his one thousand adventures and a motto or word of advice for any situation. He is as brave as they come and as loyal, and sometimes as crotchety as a wet hen - especially when Hot Rod's adolescent thoughtlessness propels them into dangerous areas. Kup loves the Dinobots because they love hearing his tales of glory. When he transforms, Kup's vehicular mode is somewhat squarish and "old-fashioned" compared to some of the sleeker, "later model" Autobots, but he has no complaint about that. He sees himself as a seasoned campaigner with much knowledge to impart and he imparts it whether or not anyone has asked for it. He is sort of the Falstaff to Hot Rod's Prince Hal and he likes the role. Abilities: In robot mode, he carries an old-style musket laser that shoots bursts of metal-corrosive hydrochloric acid. Range: 5 miles. Speed: 100 mph.

Kup and Blurr in Transformers: The Headmasters

Kup continued as a reoccurring character in Transformers: The Headmasters.

Kup is featured in the Ladybird Transformers book Autobots Strike Oil. During an oil shortage Recoil tells Kup and Hot Rod of the legends of an oil lake in the mountains that had disappeared in an earthquake. In the book Recoil is colored red instead of black.[1]

Kup appear in the Blackthorne Publishing The Transformers in 3D issue #3. Kup uses Recoil against Cyclonus and the Terrorcons.[2]

Kup and Recoil had a single page biography printed in issue 7 of the Dreamwave Productions Transformers: More Than Meets The Eye comic series.

In Wings of Honor he was a member of the crew of the Autobot ship Eight Track under the command of Thunderclash.[3][4]

In The Coming Storm Kup is ordered by Landshark to move some boxes with the Autobot Elite Guard logo on them. The Elite Guard Alpha Team and Strike Team did battle against a horde of ferrovorous bugs in one of Cybertron's city-states. Magnum then ordered the Strike Team to escort the Alpha Team to Space Port Bravo for their next mission. The Strike Team then reported to Magnum and Sentinel Major, who introduced them to the new Elite Guard Special-Ops Team, also called the Combaticons.[5][6][7]

In Battle Lines Thunderclash's Elite Guard squad reported to Magnum after the Combaticons killed most of the Guard. They attempt to show the Council that the Elite Guard is still functional, but arrive just as Optimus Prime is appointed the new commander of the Autobots. [8]

In the Japanese manga "Big War" #2 the Autobots Rodimus Prime, Grimlock, Kup and Wheelie, along with their human allies Spike Witwicky and Daniel Witwicky send Computron into battle against Galvatron's new warrior combiner Abominus. The Terrorcons spit "corrosive control liquid" against Computron, taking control of him and turning him into a Decepticon. Spike luckily uses his new exosuit to free Computron with "defense spray." Defeated, Galvatron retreats.[9]

Kup appears in the Generations 2011 issue #2 "The Fierce Fighting on Planet Nebulos" where he is part of a team lead by Stepper to obtain a cure for nano-virus which is effecting some Autobots. When the Autobots arrive on Nebulos they are attacked by a group of Decepticons lead by Straxus. The Autobot are able to obtain the cure and bring it back to Earth, where Ricochet's team is commended by Optimus Prime.[10] 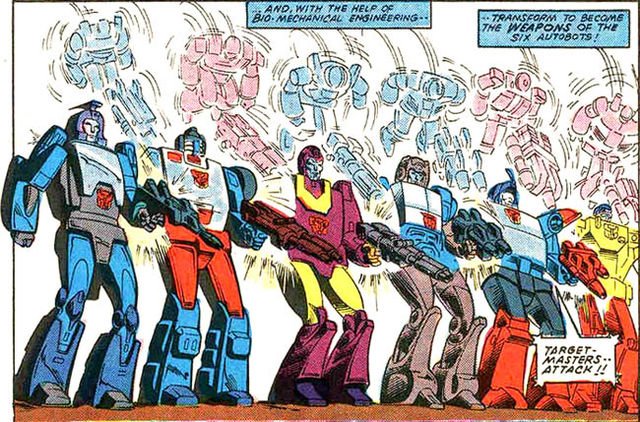 The Autobot Targetmaster from Headmasters issue 4

In issue 4 of Headmasters Kup became a Targetmaster when partnered with the Nebulan named Recoil.

In issue 38 of The Transformers the Autobots and Decepticons from Nebulos arrive on Earth.

In issue 39 Spike Witwicky introduces Fortress Maximus and the Autobot Targetmasters to his father Sparkplug.

In issue 59 of the Marvel Transformers comic Blackjack was sent to put an explosive on board the Ark, but he was captured by Blurr, Kup and Getaway.

In issue 71 the Autobots surrender to the Decepticons, and Kup gives up his partner Recoil.

A reissue of Targetmaster Kup with his Targetmaster Recoil and a remold of his Musket Laser with 5mm handle. Also came with a reissue of Wheelie.
This set was recolored into Orion Pax with Barrel Roller and Dion.

A remold of Cybertron Red Alert. Part of the BotCon 2009 exclusive "Wings of Honor" set.

A new mold. Kup comes with Titan Master Flintlock who turns into his head.
This toy was recolored with a new face to as Tribute Orion Pax.

A new mold.
This toy was remolded into Legacy Orion Pax.

In Shattered Glass, Kup is an evil mirror universe duplicate of the Generation 1 character. He is a member of the Autobot Elite Guard and leads Autobot Remote Patrol Six. He is one of Optimus Prime's evil Autobots, but later sided with Rodimus Prime. He seems to be an Autobot of few words.

Kup appears as a member of the Autobots in the story Do Over by Fun Publications. He is among the Autobots left on Cybertron after Rodimus left on the Ark with troops who were only loyal to himself. During the story he commands Remote Patrol Six who is taking radiation readings when they discover a signal coming from zone Y-AT. Kup sends Downshift to investigate.[13]

In Reunification Kup leads Warpath, Camshaft and Hound in an attempt to assassinate Optimus Prime. Optimus uses Ricochet as a shield to block a blast from Warpath, grabbing Warpath and throwing him into Hound. Optimus then crushes Kup's head with one hand as he shoots Camshaft.

A set of third-party labels from Captured Prey which reproduce the symbol on Shattered Glass Kup.[14]

There's a rumor among younger Autobots that Sergeant Kup is laserproof. He has a habit of calmly walking through even the thickest crossfire to deliver advice and encouragement to raw recruits cowering under cover. The 'bots that serve under him think he might have a screw loose somewhere, but they'd still gladly follow him anywhere.

Kup makes a cameo in the opening of the Nintendo DS version of the Transformers: War for Cybertron video game, where he issues the "universal greeting" to the player.