From WikiAlpha
Jump to: navigation, search
For other uses, see Breakdown.

Breakdown is the name of four fictional characters from the Transformers series. The original Breakdown was a member of the Stunticon combiner team. He should not be confused with the Autobot Brakedown.

Breakdown, a Lamborghini Countach, was one of the Stunticons in Transformers G1 and formed one of the limbs of Menasor.[1] He also sometimes forms part of Galvatronus.

Like all Scramble City style combiner limbs, he can form the any limb of any combiner or combine with Metroplex.

Thinks everyone is staring at him, even Earth cars and stoplights. His self-consciousness hurts his performance. Finds heavy traffic nerve-wracking. Would prefer to be human so he could fit in better. In car Mode, engine emits vibrations that cause mechanical failures in other vehicles; prone to leaky fuel pump. In robot Mode, carries a concussion rifle which also causes mechanical failures. Combines with fellow Stunticons to form "Menasor".

Breakdown first appears in the two-part episode "The Key To Vector Sigma". Like the other Stunticons, he is created after Megatron commissions Rumble to find him some vehicles to be turned into Decepticon warriors, in order to more effectively battle the Autobots on the roads. Megatron modifies the cars so they can transform into remote-controlled robots, and then takes them to Vector Sigma so they can be given personalities of their own. He returns to Earth with the other Stunticons and engages in the destruction of a military base, before being called on to form Menasor to battle the new Autobots, the Aerialbots. The Aerialbots combine into Superion, but Menasor is winning until a rebuilt Omega Supreme arrived and defeats him.

The Stunticons first appeared in the second G.I. Joe vs. the Transformers miniseries from Devil's Due. After Cobra Commander and Cobra, followed by G.I. Joe, had journeyed to Cybertron, weapons fire caused a critical malfunction in Teletran 3, causing numerous Autobots and Decepticons to become time-displaced. Among these were the Stunticons, who were dumped in 1930s Earth and reformatted into period cars. They were eventually defeated and returned to the present by a combined force of G.I. Joe and COBRA members, as well as another Transformer lost in that time - Optimus Prime

The Stunticons would also appear in the third mini-series, being recruited by Serpent O.R, a human military-created cyborg with Megatron's memories, and would participate in the ambush that killed Bumblebee. Seen in group shots where Serpentor is gathering the Decepticon army, their next major role would be in the assault on Capital City, assisting Predaking and Piranacon in taking down Omega Supreme. Breakdown and the Seacon Nautilator were the ones assigned to guard the human captives, but Snake-Eyes used his ninja powers to take control of Breakdown and had him shoot Nautilator, freeing them. Razorclaw and Motormaster were the ones who stopped Prime's attack on Serpentor, beating him near death, but were then killed by the Cobra Commander-controlled Serpentor.

Unlike previous series Breakdown and the other Stunticons were not portrayed as recently created characters, but were Decepticons from Cybertron millions of years ago, like most other Decepticons. Initially just five individual Decepticons, the five who would become Stunticons were chosen in an experiment to improve on the combiner process which had created Devastator. Their combined form was called Menasor.

The Stunticons appeared in the second Generation 1 mini-series where Menasor was revived by Rumble and Frenzy, killing the Omnibots, Roadbuster, Whirl, and damaging the Protectobots (combined as Defensor) before battling and being defeated by Ultra Magnus on Cybertron. With the closure of Dreamwave, the fate of the Stunticons is unknown. 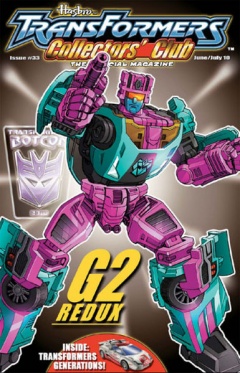 In Generation 2 Redux Breakdown was among the troops under the command of Clench on Earth.[2]

Breakdown appears in "A Flash Forward Epilogue" by Fun Publications. He is found playing cards with other Transformers in Axiom Nexus when a pair of Optimus Primes interrupt with a mission for Depth Charge.[3]

The Stunticons made their first IDW Publishing appearance in issue 3 of The Transformers: Megatron Origin, appearing amongst Megatron's gathering of gladiators that would eventually become the Decepticons. Breakdown has also appeared in previews for the first issue of the new ongoing series, with a design based on the Universe Sunstreaker/Sideswipe mold.

Wildrider and the Stunticons are not major characters in the comics. They were featured in issue #22, Heavy Traffic, where they battle the Aerialbots as well as Circuit Breaker and RAAT troops. [4]

Breakdown makes an appearance in the Decepticon forces under the command of Megatron in issue #7 of the Marvel Generation 2 comic series, in a story called "New Dawn." Megatron leads his Decepticons against Jhiaxus' second generation Cybertronians near the moon of Tykos. The Decepticons are defeated and Megatron left injured, presumed dead, but swearing revenge.[5]

Breakdown was sold in 1986 by itself, and later with the other Stunticons as a gift package.

Samples of redecos of all the Stunticons were made for the Generation 2 toy line, but they never made it to general release.[6] The few that were produced are considered highly collectible.[7] Breakdown was released in small numbers at BotCon 1994.[8]
In April of 2008, rare prototypes of this toy were sold on ebay and garnered bidding of over US$2,000.[9]

First announced in Previews magazine for January 2003 were a set of 5 Stunticon Spy Changers - Breakdown, Drag Strip, Motormaster, Dead End, and Wildracer. Although it is uncertain what mold he would have used, it seems likely he would have been a redeco of Generation 2 Firecracker, who had a similar vehicle mode.

A BotCon 2010 exclusive and an homage to the BotCon 1994 toy, this figure is a redeco of Universe Classic Series Deluxe Sunstreaker (using Sideswipe's robot configuration) in Breakdown's Generation 2 turquoise and lavender colors and a head sculpt similar to his original toy.[10][11]

A 6-pack of recolors that are homages to the unreleased Generation 2 Stunticons.

An unlicensed third-party version of Breakdown. Based on the Smallest Transformers Lambor mold, but colored to look like Generation 2 Breakdown.

An unlicensed third-party version of Breakdown. Based on the Smallest Transformers Lambor mold, but colored to look like Generation 1 Breakdown.

An unlicensed reproduction of the Timelines Breakdown based on the Universe Sideswipe mold. This toy adds a should mounted missile launcher.

An unlicensed recolor of the Timelines Breakdown toy colored like the Generation 1 toy.

In Shattered Glass, Breakdown is a mirror universe version of the Generation 1 character as a scout of the heroic Decepticons.

In Do Over, an unusual energy reading is detected in Alpha Trion's lab. The Decepticons send Breakdown to investigate, but is captured by Sky Lynx and presented to Alpha Trion as a gift.

Breakdown is a playable Decepticon character in the 2010 video game Transformers: War for Cybertron. In the Decepticon campaign, he is an extremely paranoid young Decepticon that thinks everyone and everything is out to get him - especially Megatron, who refers to him as suicidal. He prefers to do his duties in anonymity.

In Transformers: Prime, Breakdown returns as an extremely young Decepticon bovver boy, who is the muscle for Megatron. He does retained much of his original Generation 1 personality as well as his original Generation 1 color scheme, but he is much taller, muscular, threatening, uncontrollable, violent, and angrier than his previous incarnations. His new vehicle mode for the Prime series is officially a blue monster armored van.

Breakdown has been know to help form the combiner Grand Galvatron.

Breakdown made his official cartoon debut on Episode 10: "Deus Ex Machina" to face his main enemy, Bulkhead. He now works as the partner of Knock Out.

He also appeared in "Speed Metal" and "Out of His Head".[12] In "Operation: Breakdown", he is captured by the human organisation M.E.C.H while fighting Bulkhead, and is eventually saved by his longtime foe. Though Breakdown is grateful, it does not stop him from attempting to carry out Starscream's command to destroy him (though after some initial hesistation). It is also noted that Breakdown's right eye was removed, and he wears an eye patch to cover where his optic used to be. In "Metal Attraction", Breakdown attempted to redeem himself in Megatron's eyes by recovering a magnetic weapon, only to meet resistance, not only from Bulkhead and Arcee, but from the renegade Decepticon Airachnid. Breakdown failed to retrieve the weapon, but brought Megatron a "consolation prize"; Airachnid, who had been magnetically fused to his back during the fight.

Breakdown appears in video game Transformers: War for Cybertron.[13] He is a playable character in the last three chapters of the Decepticon campaign. He is a very capable Decepticon, though he is extremely paranoid and always believes that everyone else is staring at him. He assists Megatron and Soundwave in infiltrating Iacon, destroying Zeta Prime, and hunting down and defeating Omega Supreme.

A green recolor fo the Bumblebee Battle Suit with a recolor of Cyberverse Legion Breakdown.

Part of an exclusive set for Botcon 2011, this version of Breakdown is from the Transformers Animated series. He is based on the Animated Deluxe Rodimus Minor mold with a new head, and colored to look like the Generation 1 Breakdown toy.[14][15]

Breakdown appeared in the Transformers: Timelines story "The Stunt-Con Job". After the events of Transformers Animated the Stunticons set up a Stunt Convoy show in the city of Kaon and used it as cover to attempt to break Megatron out of his detention at Trypticon. Their efforts were thwarted thanks to the efforts of Cheetor, Optimus Prime and Sideswipe. The Stunticons were placed in detention with Megatron and an attempt to rescue them was made by the Decepticons Blot, Mindwipe, Oil Slick, Scalpel, Sky-Byte and Strika.[16]