Sunstreaker is a fictional character from the Transformers series introduced in 1984.

Sunstreaker is sometimes depicted as a combiner, who forms part of Betatron, Optimus Maximus or Sky Reign. In the BMOG Toys comics he has also been part of Galvatronus.

The Marvel Comics bible for the Transformers originally called Sunstreaker by the name Spinout.[1]

Profile: Sunstreaker is the complete egotist. He feels he is simply the most beautiful thing on Earth. He is constantly discussing his sleek lines, his aerodynamic styling and he is loudly and continually grateful to the Ark for giving him such a magnificent body. Sunstreaker is faintly contemptuous of the other sports-car Autobots, particularly his fraternal twin Sideswipe, whose design, he says, is spoiled by the rear-mounted engine in his automobile mode. When he is in his robot mode, Sunstreaker is the most dangerous, most ruthless of the group; a calm, competent war machine. His biggest fault is his tendency to stop so that people can admire him when he ought to be tending to business.

Abilities: In Autobot mode, Sunstreaker wears a right shoulder-mounted, laser-guided, ground-to-air missile launcher. Each missile is the equivalent of 450 lbs. of TNT and can down a Decepticon jet fighter at a maximum distance of 37.5 miles. He also carries an electron-pulse gun capable of emitting at 300 bursts per second a beam of highly energized electrons (the high rate of emission makes it effectively a continuous stream of electrons). A sustained burst of 1.5 seconds will burn a 3 inch hole in a .5 inch-thick plate of titanium-alloy steel. His upper torso construction incorporates a tough polymer-steel skin, making him particularly resistant to artillery fire.

Weaknesses: A potent arsenal and tough hide like Sunstreaker's would be sufficient to preclude any serious weaknesses, if it weren't for his ego and sociopathic tendencies. His inability to be a team player and overriding lust for battle often diminish his overall value to the Autobots, and the ease with which he can be baited by anyone, including adversaries, often puts his well-being in serious jeopardy.

Sunstreaker appeared frequently in the animated series as one of the Autobots on Earth, saving Trailbreaker from the Seekers in "More Than Meets the Eye", but had very few prominent roles.

Predictably, given his ego, he was one of several Autobots who appeared as "giant evil aliens" in a Hollywood movie ("Hoist goes Hollywood") alongside Hoist and many others, before ending up battling the Decepticons for real.

Sunstreaker appeared briefly in The Transformers: The Movie helping to pilot the shuttle that flew Optimus Prime and the Dinobots to Autobot City. .

Sunstreaker made some appearances on the serial Transformers: Headmasters. In the first episode, he managed to elude a chase of Blitzwing, that collided with a building.

Sunstreaker was featured in the 1985 Find Your Fate Junior book called Dinobots Strike Back by Casey Todd.[2]

Although Sunstreaker's voice didn't appear in the 1985 audio adventure Satellite of Doom, he was depicted in the book as one Autobots who helped destroy the satellite.

Sunstreaker appeared in the 1984 sticker and story book Return to Cybertron written by Suzanne Weyn and published by Marvel Books.[3]

Sunstreaker appeared in the 1984 sticker and story book The Revenge of the Decepticons written by Suzanne Weyn and published by Marvel Books. In this book he is depicted as being red, his original Diaclone colors.[4]

Sunstreaker appeared in the 1986 story and coloring book The Lost Treasure of Cybertron by Marvel Books. 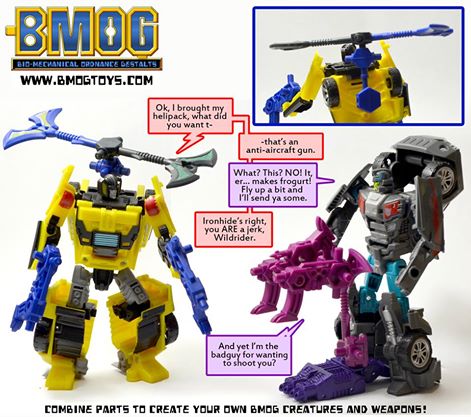 Sunstreaker was part of the Galvatronus combiner. Galvatronus deserved a big weapon in battle, so he carried the Obliteration Cannon made of parts of Cobiak, Deep Blue, Mant-Axe and Ursenal. He also carried an axe from Dread Pickaxe Raybot, a rifle and scanner from Peg-Paw Plundor, a serrator axe from Mant-Axe and a plutonium rifle from Bearium.[6]

In At Fight's End Dirge, Ramjet and Thrust attack a city under the orders of Megatron. The city is defended by Ironhide, Jetfire, Optimus Prime and Sunstreaker.[7]

In "Invasion" Sunstreaker is among the Autobots in Canada who help get people to safety from an earthquake caused by Shattered Glass Ultra Magnus using the Terminus Blade.[8]

Sunstreaker appeared in Another Light where he was among the mixed Autobot and Decepticon team stationed at the Ironworks base on Classicverse Earth. He evacuated on a shuttle commanded by Grimlock when the planet was attacked by Shattered Glass Primus.[9]

Long ago, before the war, Sunstreaker and Sideswipe were law enforcers working under the Senate, and were involved with the arrest of Impactor.

A remold and recolor of Robots in Disguise Deluxe Prowl.

This toy was recolored and remolded into Universe' Classic Series Deluxe Sideswipe.

Comes with a gun, combiner hand/foot and collector comic, although Sunstreaker does not appear in the comic story.

A 5-pack of Autobots who form Convoy Grand Prime.

Following the restoration of Cybertron from the Great War, Sunstreaker was one of the many Autobots blacklisted by the new High Council for being a supporter of Optimus Prime.