From WikiAlpha
Jump to: navigation, search
For other uses, see Knock Out.
See also: Knockout (Transformers)

Knock Out is the name of five fictional characters from the Transformers series.

In the Transformers: Armada series, Knock Out is the name of a Mini-Con, a member of the Land Military Team. He transforms into a ATV missile luncher.

Each of these tough land vehicles carries multiple missiles. When launched, they fill the air with streaming trails of explosive firepower. The AUTOBOTS recognize the destructive power of these mini-cons and fight fiercely to keep them out of the hands of the DECEPTICONS. Meanwhile, MEGATRON is determined to possess them and their power.

Knock Out and the Land Military Team were captured and altered by the Decepticons to be used as weapons of conquest millions of years ago. They escaped aboard the Exodus with most other Mini-Cons.

Bonecrusher first appeared in issue #7 of the Dreamwave Armada comic. They declared themselves free agents upon reactivating on Earth. Nonetheless, at the request of Alexis, Carlos and Rad, they freed Jolt, Longarm and Sparkplug from Decepticon captivity and helped them save the Autobots from the Decepticons.

Later they were taken against their will to Dualor's moonbase. Following the destruction and abandonment of the moonbase, the Land Military Team stayed with the Autobots, where they were instrumental in separating Star Saber from Megatron's grip after he used it to destroy the invading Galvatron.

Knock Out appeared among the Mini-Cons in issue #18 of the Transformers: Armada comic book who aided Over-Run using the Mini-Con Matrix in the defeat of Unicron.

Knock Out appeared in the text story from Fun Publications called Force of Habit. This story explained where he was during the events of the Cybertron story. Ultra Magnus was the commander of various Autobot ships sent to other planets in search for the Cyber Planet Keys. He also served as captain of the Iron Hope which was crewed by Bonecrusher, Grimlock, Ironhide, Knock Out, Overcast, Prowl, Quickstrike, RipTide, Skyblast, Smokescreen, Swoop, Wreckage and the Sky Scorcher Mini-Con Team.

He was later recolored into Armada Broadside and Cybertron Steamhammer. [2]

A Chinese made remake of Armada Knock Out by Agglo and sold in Big Lots stores in 2007, this toy is about double the size of the original toy.

Although Knock Out has three distinct independent modes (fire truck, robot and gun) he isn't officially listed as a Triple Changer. He also becomes the head and some of the chest of Ultra Magnus. He is an independent character from the Armada Mini-Con named Knock Out, and they have even appeared in the same fiction together.

Knock Out first appears in the text story from Fun Publications called Force of Habit. This story explains where he is during the events of the Cybertron story. Ultra Magnus is the commander of various Autobot ships sent to other planets in search for the Cyber Planet Keys. He also serves as captain of the Iron Hope which is crewed by Bonecrusher, Grimlock, Ironhide, Knock Out, Overcast, Prowl, Quickstrike, RipTide, Skyblast, Smokescreen, Swoop, Wreckage and the Sky Scorcher Mini-Con Team.[3][4]

A redeco of Armada Rollout. Knock Out was packaged together with Ultra Magnus and a recolor of the Mini-Con Space Team.

When he first came to Earth he choose a holographic driver which looked like a famous 1950's rebel film character.

Though he is an incredibly flashy and skilled fighter, KNOCK OUT is also desperately insecure. He practices awesome combat maneuvers constantly in private to be sure that the other Autobots will notice him on the battlefield. His highest ambition is to be the leader of a special combat team, and to get the combination retrofit everyone has been talking about.

Knock Out first appears among the Autobot members of N.E.S.T. in the book Transformers: The Veiled Threat by Alan Dean Foster. Knock Out trains among the Autobots in Diego Garcia. He later joins Longarm on a mission to Peru to find Decepticons that have been detected in the deep jungles. On a steep mountain pass, the party is attacked by Decepticons Ruination and Blademaster. Despite inexperienced and risky behavior by Knock Out, both Decepticons are severely damaged and driven off.

Knock Out appears in Transformers: Nefarious #1, set months after the events of the 2009 film. Bumblebee, Breakaway, Jolt, Knock Out and Dune Runner are sent to investigate spark fragments detected at Kingdom Petrochemicals. Arriving first Breakaway is warned by Soundwave to leave, but unwilling to give in the Autobot is swiftly defeated. Bumblebee and his team fire on Soundwave, who escapes.[5]

A new mold of Knock Out that transforms into a motorcycle. This toy was redecoed into the Decepticon Reverb and the Autobot Backfire.

Knock Out is the Decepticons' egomaniacal medic. His robot mode appearance is reminiscient of Beast Wars Terrorsaur. Despite being a medic, he admits he is better at breaking then fixing when Starscream called him in to help with Megatron's recovery. Knock Out is concerned with his form, as he once forced a driver off the road after he scratched his paint job, and insulting Optimus after he ripped off his door. He transforms into a red sports car, a modern take of a 1971 Dodge Charger.

Deluxe Knock Out: Knock Out is oily slick; the ultimate salesman. Everyone knows his weapons are dangerous and prone to malfunction, and his installation methods often leave Decepticons scarred and crippled. But who can resist having quantum disintegration at his fingertips?

Cyberverse Energon Driller with Knock Out: Knock Out has spent so much time in the underground weapon design and cyber-surgery racket that he's come to literally prefer being underground. For moving shipments of plasma fusers through Autobot territory there's nothing better than the Energon Driller.

Cyberverse Legion Knock Out: Knock Out has built and installed everything from singularity generators to solar disruptors. Entire star systems have collapsed into black holes as a result of the – sometimes accidental – discharge of his weapons. See, he’s not too big on safety protocols. But once his weapons are thoroughly tested and proven safe, Knock Out keeps the best ones for himself. He boosts their power output, adds a few personal touches, and then takes them out into the field to see what sort of damage he can do.

Knock Out appears as Medic Decepticon, and later Autobot in the Transformers: Prime.

In Transformers: Robots in Disguise (2015), following Great War and restoration of Cybertron, Knock Out was one of the many Autobots blacklisted by the new High Council for being a supporter of Optimus Prime. 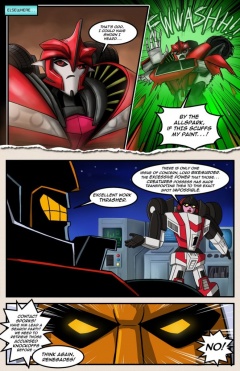 Knockout appeared in Grab and Go.[6]

A large driller playset with a Legion class Knock Out as it's drive.

A recolor of Legion Knock Out in less show-accurate colors. Come with Shockblade weapon.

A recolor of Deluxe Knock Out exclusive to Big Bad Toy Store.

Knock Out is a Decepticon who turns into a race car. He is based on the Prime version of the character.

Well hello. I’m KNOCK OUT, and I build and install weapons for the DECEPTICONS. Nothing makes me happier than watching one of my blasters blow the bricks out of a KREON. Well, except experimenting on folks. Speaking of which, have you ever considered replacing that weak old arm of yours with an ion cannon?

A Lego-like building block kit of Knock Out and Wheeljack with 273 pieces to assemble in either robots or race car modes. Comes with Kreons Knock Out, Wheeljack and two human drivers.