Submarauder is a Decepticon Pretender.[1]

Biography: Submarauder is a reclusive intellectual who likes to ponder the mysteries of the sea in total solitude, making other Decepticons wonder exactly what he finds so fascinating down there. Hovering in the darkest depths of the ocean, Submarauder is content to observe the undersea creatures he so respects as they swim with and around him. Despite his quiet, scholarly demeanor, it doesn't take much to activate Submarauder's hair-trigger anger; just seeing an Autobot penetrate his watery domain is usually enough to make him explode with hatred and rage. Submarauder is a diabolically clever warrior, known for appearing suddenly and silently among his prey. He attacks with a blind fury, rending and blasting his foes before composing himself and floating off to return to his lonely undersea travels.

Weapons/Abilities: Subject has great strength and intelligence as well as overall endurance. He is and expert in marine science; there is also some evidence that he can communicate with and command some sea creatures. His outer Pretender shell is armed with a proton cannon, deflector shield, and an organic-steel sword that eats through metals. Inner robot can use all of the shell's armaments and can also transform into a deep sea attack submarine armed with the proton cannon.

Weaknesses: Subject sometimes stays in the water too long, neglecting to refuel. He is also extremely protective of marine creatures and will even confront fellow Decepticons who carelessly threaten them.

Although the US Transformers animated series was canceled before Submarauder was brought out, his Japanese counterpart Gilmer appeared in the Masterforce anime series. Submarauder's only appearance in animation was in early commercials for the Pretender toys. [2]

In a story called "By their Blasters you shall know them ...!" from Transformers Comic-Magazin issue #12 by German comic publisher Condor Verlag Optimus Prime instructs Backstreet, Bumblebee and Ruckus on how to identify Autobots from Decepticons in battle using the Ark's computer. Submarauder is one of those he displays to the Autobots.[3]

In a story called "Memories of Bumblebee" from Transformers Comic-Magazin issue #15 by German comic publisher Condor Verlag Bumblebee views a recording of Optimus Prime where he identifies Autobots and Decepticons in battle using the Ark's computer. Submarauder is among those he displays.[4]

Submarauder was a member of Ratbat's Ultracon faction in the third War Within series from Dreamwave Productions. He was pre-Pretender. Submarauder appeared as a Pretender in the Dreamwave More Than Meets The Eye biography series.

A non-Pretender Submarauder appeared in IDW Publishing Transformers: Robots in Disguise #12. After the Chaos War, Submarauder was one of the Decepticons who started rioting on the streets of Cybertron in celebration of Megatron's return.

Submarauder made few appearances in the Marvel adaptation. He debuted with the rest of the Decepticon Pretenders in issue #40 "Pretender to The Throne." He made only cameo appearances throughout the remainder of the series.

Submarauder appeared in issue #54, "King Con!" In this story the Decepticon Pretenders were assigned to protect a power converter Scorponok was building in the meadowlands of New Jersey.

Submarauder served as Lord Zarak's personal transport when he was leaving New York City to the secret undersea Decepticon base to devise a plan to defeat the Autobot Micromasters. 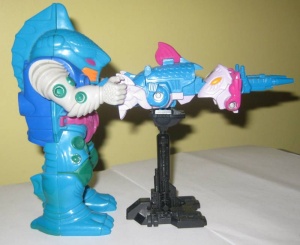 A new mold. Turns from robot to submarine. Comes with shell, rifle, sword, shield and belt.
This toy is identical to the Gilmer toy.[6][7]

Submarauder is one of the Micromaster partners to Astrotrain. He is a heroic Decepticon.

Submarauder appeared in the fiction Dungeons & Dinobots, a text based story from Fun Publications. Astrotrain and his Micromasters were used to transport supplies and energon rods from the Arch-Ayr fuel depot to the Deception base at Darkmount.[8]

Submarauder appeared in the story Do Over by Fun Publications. He among the crew of the Nemesis, which followed the Autobot's Ark to Earth. When the Nemesis was unable to close in on the Ark Astrotrain and his partners were sent to disable its weapons.[9]

In Eye in the Sky the Decepticons lamented the fact that they did not know where Astrotrain and his Mircomaster partners had gone down on Earth. The Decepticons could use their help in defeating a human militaty satellite the Autobots had gained control of and were using to take over the Earth.

In Blitzwing Bop the Decepticons recover Astrotrain after he is found frozen in the Antarctic.

A recolor of Armada Jetfire.
This toy was repurposed into Shattered Glass Astrotrain with Fasttrack, Stonecruncher, Submarauder and Tailwind.[10]