Steam Robo is a fictional character from the Machine Robo series. He is a member of the Battle Clan who turns into a train. He was introduced as a toy in 1982, but did not appear in fiction until 1986.

Steam Robo is a heroic Machine Robo of the Battle Clan who turns into a train. He is a racer and warrior, but also enjoys relaxing with a good beverage. Because of his mechanoid nature Steam Robo does not need to breath oxygen and is resistant to cold, but is vulnerable to intense magnetic fields. His weapon of choice is an Oxidation Smoke Discharger.

In Machine Robo: Revenge of Cronos episode 19, "Race to the Death!", Steam Robo first appeared and took part in the race at Momo. For a short time he was in first place, until he was knocked into the sea by a wave when crossing the land bridge to Death Island. He was rescued by Battleship Robo.[1]

Steam Robo was seen among the population of the city near the volcano in episode 23, "The Burning Skies".[2]

Steam Robo helped defend the city from a Gandora attack in episode 24, "Gather All Machine Robo".[3] 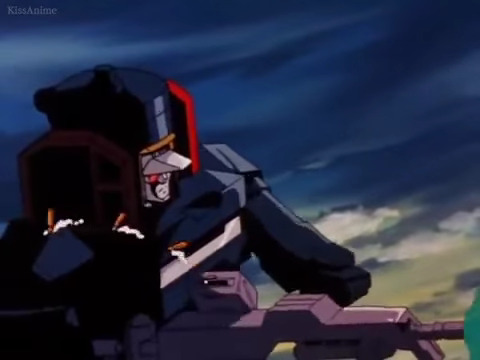 In episode 28, "Tough Trailer - 10 Seconds to Detonation", Steam Robo was present in Yamilan City when it was attacked by Gandora forces.[5]

Steam Robo last appeared in a minor cameo in episode 42, "Vikung-Fu - Cry of Anger", where he is seen standing guard in the Battle Base.[8]

A new mold. Turns from robot to train. This toy was released as GoBots 05 Loco by Tonka.

A release of Steam Robo for Machine Robo: Revenge of Cronos.

A new mold. Turns from robot to train.