Loco is a fictional character from the GoBots series. He is an evil Renegade GoBots who turns into a steam locomotive.

Loco is one of the Ranagade soldiers of Cy-Kill. He turns into a train.[1]

As crazy as his name, Loco loves to turn into a locomotive and send his enemies into locomotion.

Loco was one of the names in a word find that had to be solved to win a copy of the Challenge of the GoBots video game from Your Sinclair magazine.[2]

Like most GoBots, Loco has numerous abilities because of his robotic body. He does not age, can survive in space and is super-humanly strong and tough. He can fly in robot mode and project energy blasts from his hands. His body heals quickly when supplied with energy. He can turn into a JNR Class D51 locomotive. 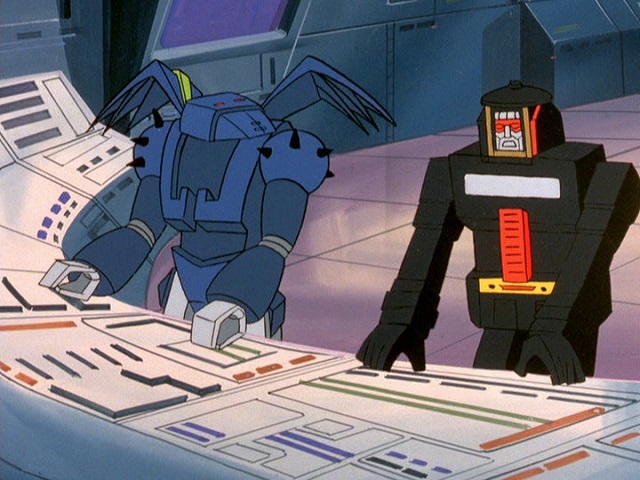 Hornet and Loco in Challenge of the GoBots

In Challenge of the GoBots Loco was a long-serving Renegade, being a member of the Renegades before Cy-Kill defected from the Guardians, as seen in a flashback in the episode "Et Tu, Cy-Kill."

Loco first appeared in a seeming animation error sitting among Guardians in the episode "Conquest of Earth." He was later seen fighting in the defense of the Renegades' fortress on GoBotron.

He was used sporadically after that, most notably helping the cyborg arms dealer Trident hijack a shipment of UNECOM materials.

Loco appeared in episode 52, "Renegade Carnival" where worked on the Renegades' unsuccessful attempt to kidnap the psychic Mira.

In the story Cultural Appropriation by Fun Publications it was revealed that Apollo, Breez, Bullet, Decker Decker, Hi-Way, Jack-Attack, Loco, Pow Wow and Vain Train were sent to explore Level 29 when the Cataclysm threatened to destroy the GoBots home universe.

Loco appeared in the Transformers: Renegade Rhetoric episode 17 "Coup de Grunge". A Renegade assault on the Guardian communication hub was repulsed by Courageous, putting Cy-Kill in a foul mood. He vented his frustration on several of his men, which backfired shortly thereafter when the Master Renegade made a bid for leadership. He offered the Renegades four Power Suits and the ability to form their own combiner. Loco, Fly Trap, Screw Head, and Spoiler took him up on his offer and imprisoned Cy-Kill and Cop-Tur. The Renegades assaulted the GoBotron Fortress protecting GoBotron's capital, GoBotolis. Their combined form was defeated by Courageous when the Master Renegade and Loco argued about who should control the giant form. The Guardians derisively nicknamed the combiner "Grungy". The Renegades returned to Rogue Star, only to find Cy-Kill free. The Master Renegade escaped with his ship, but not before Spoiler had managed a full scan of it. Dr. Go was confident that, not only could he duplicate it, he could improve upon it.[4]