From WikiAlpha
Jump to: navigation, search
For other uses, see Blast Off.

Blast Off is the name of five fictional characters from the Transformers series. The original Blast Off was a Combaticon who was introduced in 1986, and formed the right arm of the gestalt robot Bruticus. Since then other Transformers have shared the name Blast Off.

Although Blast Off appears to be a cruel and ruthless opponent to the Autobots and a snob to his fellow Combaticons, he is in reality somewhat lonely, as his missions in space shuttle mode leave him feeling isolated.[1] Combines with fellow Combaticons to form Bruticus. Also becomes part of Scramble 7.

Blast Off debuted in the second season episode, Starscream's Brigade. In the episode, Starscream is banished from Decepticon Headquarters after his latest attempt on Megatron's life. He is sent to the island of Guadalcanal where he discovers old World War II vehicles. Starscream decides to use these to build his own army. He raids a Decepticon detention center on Cybertron and steals the personality components of several renegade Decepticons. Blast Off is placed in an old WWII bomber and the body is reformatted into a space shuttle.

Blast Off's personality shows him being aristocratic. He speaks with sort of a British accent. His ionic blaster disrupts the electrical system's on his targets. In the series, Blast Off often became the right arm of Bruticus, with his wings becoming the chest plate. On the toy, however, the chest was a separate piece.

Blast Off was later involved in a Decepticon plot to capture the Middle East oil fields. Early in the episode, Blast Off shoots down Slingshot forcing the Autobots to retreat. In order to prove that the Decepticons were stealing planes for their operation, Slingshot and Skydive remain in a hangar in their jet modes. The Arabian planenappers disassemble the two Aerialbots and store their parts in laundry trucks. Blast Off opens the truck to inspect the parts, but orders them scrapped when Slingshot fakes a short circuit. Later on, the Aerialbots arrive on the scene and the Decepticons use their new jet drones to attack them. Blast Off is assigned three of these jets. However, these drones proved to be no match for the Aerialbots and are destroyed.

Later in the third season, Blast Off comes into contact with a Scuxxoid, who was seen shooting a weird weapon. The alien tells him that the weapon uses Death Crystals, a powerful energy source that grows on a monster names Chaos. Blast Off and Runamuck decide to test the weapon on the Autobot Sky Lynx, punching holes into his armor, forcing the Autobots to retreat.

Blast Off made various other appearances as a member of the Combaticons, throughout the remainder of the series, as well as in the Japanese series Transformers: The Headmasters.

Dreamwave Productions' 21st century re-imagining of the Generation 1 universe took its inspiration for the Combaticons from the original animated series, casting them as Decepticon prisoners who were reduced to protoform stasis because they were too dangerous to be released.

Onslaught, Brawl, Blast Off and Vortex originally appeared as part of Shockwave's attack on Iacon in the first War Within series. At the same time Swindle was with Starscream, Motormaster, Runabout and Runamuck after Starscream head sent Megatron and Optimus Prime down further into the depths of Cybertron.

Later, when Optimus Prime led a rebellion against Shockwave's domination of Cybertron in 2003, Starscream took the opportunity to form a power base, taking the protoform Combaticons to Earth and outfitting them with new alternate modes taken from an abandoned military base, then leading them in an attack on the Ark in order to acquire parts to make the Decepticon space cruiser, the Nemesis, space worthy. Confronted in battle by Brawn, Bruticus was caught in an explosion as Ratchet self-destructed the Ark, but he survived the conflagration, only to be knocked out by artillery fire from an incoming Autobot shuttle. After a battle with the evil clone, Sunstorm, Brawn opted to work out some of his stress on Bruticus's unconscious body, punching the gestalt about the head until his comrades yelled at him to stop. Bruticus would return, battling Sky Lynx for Starscream's amusement - until the Predacons appeared in their combined form of Predaking. The two gestalts battled as Starscream fled and Bruticus lost. The ultimate fate of the Combaticons in the Dreamwave universe was not revealed, due to the company's closure.

Nine million years in the past on Cybertron, Blast Off is assigned to the Autobot Elite Guard Combaticon unit, designed to seek out and stop the leadership of the Decepticon forces.

The Elite Guard Alpha Team and Strike Team did battle against a horde of ferrovorous bugs in one of Cybertron's city-states. Magnum then ordered the Strike Team to escort the Alpha Team to Space Port Bravo for their next mission. The Strike Team then reported to Magnum and Sentinel Major, who introduced them to the new Elite Guard Special-Ops Team, also called the Combaticons.[2]

While on patrol Onslaught told Metalhawk the story of how his Elite Guard team captured Thunderwing. Metalhawk then told Onslaught about how his team captured Blue Bacchus. The teams of Elite Guardsmen then came across a Decepticon who was separated from his group. Brawl was able to get the location of a Decepticon base from the captive before he went offline. The Guard teams fround the base and were able to kill Shadowcaster, the base's leader. Metalhawk's team reported to Magnum, but the Combaticons stayed to investigate, Onslaught thinking their victory was too easy. They were captured by Decepticons.[3]

He later became a Decepticon.

Metalhawk and his Strike Team were searching for Decepticons when they ran into a crazy "empty" who ranted about the coming of the "brute". They received a distress signal from Sentinel Major ordering all Elite Guard units to return base. When Metalhawk's team arrived at the base Ricochet told them of a Decepticon attack. Among the attackers are the Combaticions, but when Sentinel Major orders them to surrender, they combine into Bruticus and crush Sentinel Major.[4]

When most of the members of the Autobot Elite Guard confronted Bruticus they were nearly wiped out, with Bruticus killing most of the Guard. Dion was able to blind Bruticus, forcing it to separate into the Combaticons, but the Combaticons finished off most of the remaining Guard, including Metalhawk, who was killed by Onslaught. This left only Dion alive, buried in the rubble, and Thunderclash's team, which was off planet at the time.[5]

Blast Off debuted in issue #24, Afterdeath. In this issue, Megatron and the Combaticons are battling Optimus Prime and Protectobots near a computer lab. A human named Ethan Zachary convinces the robots to settle their dispute in a video game. They agreed on the condition that whichever side lost, their leader was destroyed in the real world. The object of the game was to destroy the leader of the group. The Combaticons and Protectobots were sent to different levels of the game. In each scenario, the Combaticons would lose and the Protectobots would win. This allowed them to merge into Defensor and destroy the virtual Megatron. However, Megatron uses a cheat code to reenter the game. Optimus defeats Megatron again, but this time he allows innocent lives to perish. Feeling guilty, Optimus forfeits the game and orders himself destroyed.[7][8]

Blast Off made an appearance in the Decepticon forces under the command of Megatron in issue #7 of the Marvel Generation 2 comic series, in a story called "New Dawn." Megatron lead his Decepticons against Jhiaxus' second generation Cybertronians near the moon of Tykos. The Decepticons were defeated and Megatron left injured, presumed dead, but swearing revenge.[9] 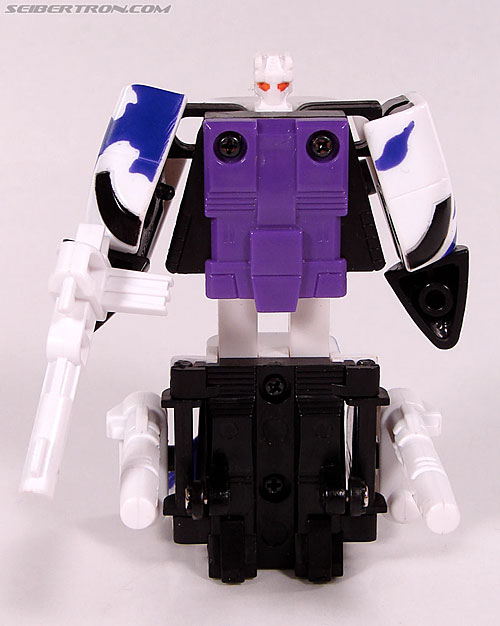 The Blast Off figure was recolored and redistributed in the Robots in Disguise toy line as Movor.

Part of the original gum toy series by Kabaya and bundled with Swindle. Two additional packs (Onslaught and Vortex & Brawl) are needed to complete Bruticus. Each package comes with a stick of chewing gum and an easy-to-assemble kit. The completed robot looks and transforms almost the same as the larger, original Takara version, but is molded in white instead of brown.[11]

The Blast Off figure was recolored and redistributed in the Generation 2 toy line.[12]

A recolor of Energon Kickback and Blight.

A figure of Blast Off that turns into a fighter jet, rather than the usual space shuttle.

A new Blast Off figure with the traditional space shuttle alternate mode.

Blast Off was the Japanese name for Energon Blackout, who transformed into an attack helicopter.

Little is known about this version of Blast Off yet. He is a Decepticon astronaut who turns into a tank.

A repackage of the toy previously released as Universe Blast Off in other countries, this toy was released as a Target store exclusive in the US as part of the Revenge of the Fallen toy line. This toy was in turn a redeco of the mold used for Energon Kickback and Blight and Timelines Landquake.

Blast Off is a Decepticon who turns into a Cybertronian jet.

Blast Off appears among the rest of the Combaticons in the 2012 video game Transformers: Fall of Cybertron.

A new mold, in colors inspired by the Energon toy line.

Blast Off is a Decepticon aligned Kreon Micro-Changer. He can fly in space shuttle mode and carries a gun.

Part of the blind packed first wave of Kreon Micro-Changers. His package has the identifying numbers 47 as the last digit on the serial number on the back of the package.

The heroic Decepticon Blast Off was mentioned in the Shattered Glass fiction. Although never seen, the author mentioned using the Revenge of the Fallen tank toy to depict him.

It is unknown if this means the other Shattered Glass Combaticons are represented by that same Revenge of the Fallen combiner members.