From WikiAlpha
Jump to: navigation, search
Skydive was the name of five fictional characters in the Transformers series.

Skydive was part of the Aerialbot team able to form a limb of the combined robot Superion. He has also been know to help form Cybertron Super Scramble, Galvatronus, Super Strong Metroplex and Ultra Prime.

Would rather read about jet fighters than be one... fascinated by the science of aerial warfare. Can, within the limits of his design, duplicate the flying motion of anything he sees... maybe the most skilled flyer of all Transformers. Flies at Mach 2.6, range 1400 miles. Carries laser guided missiles, uses nega-gun that crumbles objects by breaking molecular bonds. Prone to mid-air stalls. With fellow Aerialbots forms "Superion".

They were created on Cybertron as a countermeasure to the new Decepticon car team, the Stunticons. They are the Autobots' first combiner team, and when merged to form Superion, also considered their strongest combiner. Their first appearance comes in the two-parter "Key to Vector Sigma, pts. 1 & 2". They were created to combat the Stunticons. During the fight, the Autobots were badly overpowered by the Stunticons when the newly formed Aerialbots arrived and battled them. The Stunticons were no match for the Aerialbots and their aeroplane alternate-modes, but once they merged and formed the Decepticon Menasor, things got out of hand. However, the Aerialbots had their own combination, soon they too formed their own combiner, Superion, to combat Menasor. The two battled, but Menasor began to take the upper hand. Menasor was about to land a fatal blow to the Autobot when Omega Supreme arrived, and helped Superion to defeat him, forcing the Stunticons and the Decepticons to retreat. 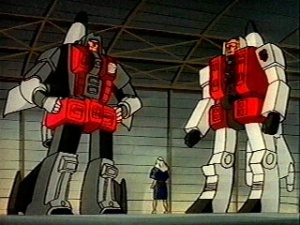 The Aerialbots and Stunticons squared-off again, later in the episode "Cosmic Rust", where Superion defeated Menasor in a combiner vs. combiner rivalry.

In the episode "Aerial Assault", Skydive and Slingshot go undercover to discover why aircraft are disappearing in the Middle East. Allied with a boy named Hassan, they find out Megatron and the other Decepticons, including the Combaticons allied with a smuggler named Ali. Later in the episode, the Aerialbots defeat the Combaticons in another combiner vs. combiner fight.

Later on, in the episode "War Dawn", they were sent back in time 9 million years ago by the Decepticons in an attempt to lose the Aerialbots forever in the dawn of time. At first, they question the motives of the Autobots. But after a series of events, and seeing Megatron's cruelty in the past, they witnessed death of a young Autobot named Orion Pax, who was rebuilt by Alpha Trion as their leader, Optimus Prime. They become convinced, and finally accept the ways of the Autobots.

In the episode "The Rebirth Part 1", the Aerialbots are put into stasis lock by the Decepticon Sixshot. As the Decepticons arrive and invade Cybertron, they encounter the Aerialbots, who are patrolling the planet. Galvatron orders Sixshot to deal with them, and he easily takes down each of the five Autobots using a different alternate mode. Using the Aerialbots' parts and components, the Decepticons were then able to construct a super engine to move the planet Cybertron.

The Aerialbots appeared in the 1986 story book Galvatron's Air Attack by Ladybird Books. When an Autobot salvage expedition was unexpectedly ambushed by Decepticons, Ultra Magnus became concerned that the Cons had developed a new form of surveillance. Silverbolt suggested his men perform a full scan of the area for any spy installation. The Aerialbots were unable to locate any sites on the ground, but a ghost of a radar contact at high altitude caught their attention. Forming Superion, they flew as high as possible and confirmed that something was out there in the upper atmosphere. [1]

Unlike previous interpretations of the Generation 1 Skydive, Dreamwave comics had all the Aerialbots being made on Cybertron before the Autobots came to Earth. They were one of several teams that used the combiner technology first used to create Devastator to make their own combined form.

The Aerialbots came to be among the Autobots on Earth in the 1980s and gained the forms of Earth-style jets.

Upon the awakening of Optimus Prime in Dreamwave's first Generation 1 mini-series, the Aerialbots were among the Autobots summoned by Optimus to rescue the remaining Autobots, who had been turned into mind-controlled weapons of mass destruction by a human arms dealer. During a subsequent battle with the Decepticons in San Francisco, the Aerialbots, merged into Superion, sacrificed themselves to stop an incoming nuclear missile, launched by rogue elements in the US military to eradicate both factions of Cybertronians in one fell swoop.

Later, it was revealed that parts of Superion, including his head, were recovered by the faction of the US government that also recovered Scourge. Hinting that they were possibly trying to rebuild him.

The Aerialbots appeared in The Transformers: Autocracy #11. Early in the war, the Aerialbots responded to Optimus' rallying call for additional support against the Decepticons and fought against the Seekers in the battle that followed.

In The Transformers #51 Skydive and other Aerialbots participated in a mission ordered by Optimus Prime to drop containers in West Africa which caused plants to grow in the desert.[2]

Skydive is more interested in reading about jet fighters than being one, He's more likely to have his face stuck in a book about World War II air battles than to be in the air himself. It's not that he's a coward- he's just fascinated by the science of aerial warfare. But even though he's a somewhat reluctant member of the Aerialbot team, he is invaluable- his knowledge of aerial military tactics is without equal. The other Aerialbots constantly look to him to plan strategy, a responsibility Skydive sometimes finds to be daunting given his extreme modesty. His biggest fault, if you could call it that, is he doesn't realize how smart he really is. At least everyone else around him does.

The information-storage capacity of Skydive's cerebro-circuitry is greater than most Transformers'. This enables him to record instantaneously any flying motions he sees, and, within the limits of his design, duplicate them himself. Thus, he's able to simulate the techniques of World War II aces he's studied on film as well as the gliding patterns of birds he's watched in person. He is possibly the most skilled flyer of all the flying Transformers. His maximum speed is Mach 2.6 and range is 1400 miles. In jet mode, he can shoot laser-guided missiles with a range of 80 miles. In robot mode, he uses a nega-gun, which shoots a beam that cancels the bonding force between molecules. Only objects held together by the strongest molecular bonds can resist crumbling to dust when hit by the beam. He combines with his fellow Aerialbots to form the giant robot known as Superion.

Sometimes, in duplicating the flight of another, Skydive pushes his design beyond its limits. This often results in mid-air stalls. He can usually recover before crashing, but while stalled, he is completely vulnerable to attack.

Skydive and the other Aerialbots were created on Earth by Wheeljack and given live by Optimus Prime using the Matrix.

Beachcomber, Blaster, Cosmos, Perceptor, Powerglide, Seaspray and Warpath were part of an Autobot team on Cybertron in the Earth year 1986. They battled the Decepticons led by Straxus over the Space Bridge and the Autobots were stranded on Earth (Transformers #18).

They were then captured by Circuit Breaker and her Rapid Anti-Robot Attack Team, She then took them to her laboratory and dismantled them for study. (Transformers #21-22).

When Starscream returns to Earth after absorbing the powers of the Underbase, the Aerialbots were amongst those in New York first to attack... and also amongst the first to fall in battle.

The Aerialbots were later revived by Nucleon provided by Grimlock.

In the prelude to the Generation 2 series, Skydive was part of a strike force sent to stop the newly reborn Megatron. The group were hopelessly outmatched by Megatron's new powers. Badly damaged, Skydive sneaked aboard the Ark, which Megatron was using as a base, and utilized a time-based deactivation cycle, so he would not register on the Ark's scanner.

Skydive made a final appearance in an issue of the Generation 2 series, helping Fortress Maximus battle Megatron. Fortress Maximus decided to blow up the Ark in an attempt to stop Megatron, and ordered Skydive to get a human scientist, Dr. Biggles-Jones, to safety.

This toy could form the arm or leg of any Scramble City style combiner. He came with one gun accessory.[3]

The original toy is repainted as Skydive again. He is now mainly blue and silver. He retains his original function, motto and bio.[4] Although Skydive did appear in the Marvel Generation Two comic, he appeared in his original colors. His only appearance in these colors was the animated commercial for this toy.

A recolor of Cybertron Legends Soundwave in the colors of Generation 2 Skydive.

A recolor of the Energon Air Team was done in the colors of the Generation 1 Aerialbots [5]
Skydive was a recolor of Energon Sky Shadow.
This toy was released in the Universe line in some countries, but sold as a Revenge of the Fallen set in the United States.
An actual A-10 has a wingspan of 1753 centimeters while this toy has a wingspan of 13 centimeters, making this toy 1/135 scale. With the toy standing 12 centimeters tall in robot mode it would mean he stands 1620 centimeters (53 feet 2 inches) tall.

A Takara exclusive 5-pack of the Aerialbots that combine into Superion.

The name Skydive was reassigned to a Decepticon unrelated to the original Aerialbot in 1992, which was only released in Europe and Japan. He appeared in a team of six known as the Predators.

Revels in the science of battle. Cold, calculating and entirely cruel. Not even understood or trusted by his fellow Predators. As plane uses the farseeing properties of Megavisor to the ultimate as a lean and hungry fighter. As robot calmly attacks with hand-held missile power.

Skydive appeared in The Transfomers: Drift #1. Skydive served under the command of Turmoil when their second-in-command Deadlock abandoned his post.

An original mold. Turns from jet to robot.

After six years, the name Skydive was reused on a deluxe Maximal Pterodactyl; however he was not part of the Dinobot sub-group. Skydive did not appear in the animated series.

To the Vehicons, Skydive is the true menace of the skies above Cybertron. Speed and maneuverability are umatched within the Maximal ranks; makes him an impossible target. Reinforced, specialized alloys offer maximum protection if any Vehicons manage to get a lock. Wings act as energy receptors, supplying incredible endurance - always outlasts opponents. Despite stoic personality, Skydive takes great pleasure in "buzzing" secret Maximal outposts.

Skydive's sole appearance in any fiction was limited to the unreleased issue #4 of the Transformers: Universe - Wreckers comic series where he and fellow Beast Machines characters Longhorn and Che witnessed the invasion of Cybertron by the Quintessons.

Skydive appeared in Wreckers: Finale Part II where he reported the status of the Dinobots to Snarl during the Quintesson attack on Cybertron.[6]

A Deluxe sized Maximal.
This figure was based on drawings by Hasbro designed Tim Bradley.[7]

The Maximal Skydive was repainted and became an Autobot. His toy was sold individually.[8]

The name Skydive was used on a Micromaster combiner as part of the Aerialbot group.[9]

This toy is a repaint of the Japanese exclusive Micromaster Supersonic, and comes with the head and one fist of Sixwing. Micromaster Skydive was released in Cybertron packaging in European countries, as they didn't have the Universe line.

In the Revenge of the Fallen toy line, Skydive was released as redeco of an Energon Aerialbot.

A redeco of the Energon toy, packaged together with his fellow Aerialbots. Together they form Superion. This toy is identical to the Universe version of the toy, also released in 2009. An actual A-10 has a wingspan of 1753 centimeters while this toy has a wingspan of 13 centimeters, making this toy 1/135 scale. With the toy standing 12 centimeters tall in robot mode it would mean he stands 1620 centimeters (53 feet 2 inches) tall.