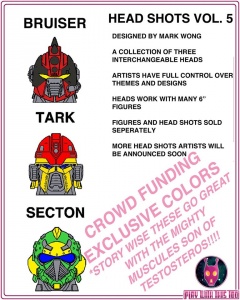 Head Shots Vol. 5 is a set of the toy heads made by Play With This Too. They are designed in several color sets, and when placed on toy bodies form different fictional characters.

Fans have said that the head of Blight Knight has a design similar to that of the G.I. Joe character Big Boa, Secton is similar to the helmet used by E.C.O. Fighter Flint and Ozone and Tark is similar to a Techno-Viper.

The Head Shots Vol. 5 were designed by Mark Wong and announced in December 2014 on the TFYLP podcast.

The retail color were announced in the Lost Protectors Kickstarter.

Head Shots Vol. 5 were among the stretch goals for the unsuccessful Lost Protectors Kickstarter campaign. They were to be unlocked if the campaign raised at least $240,000.[1]

The TFYLP podcast for December 12th, 2014 had Rik Alvarez on briefly as a guest. They talked about Desolataur, Mighty Muscules and premiered Head Shots Vol. 5.[2]

The Repacked Podcast podcast for December 29th, 2014 interviewed Rik Alvarez of Play With This Too. They talked about Simon Furman and Christopher Dahlberg joining the team and about the figures for Desolataur, Mighty Muscules and Thunderous as well as Head Shots Vol. 5.[4]