Topspin is the name of several fictional characters from the Transformers series. Due to legal issues, later incarnations of the character are called Autobot Topspin.

The portraits of Topspin and Twin Twist on their techspecs were originally reversed, causing some children a bit of confusion. This was eventually fixed.[1]

For Topspin no mountain high enough, no river wide enough to stop this one robot wrecking crew.

Topspin's bio indicated that he was something of a glory seeker, leading him to pursue individual battles at the expense of the bigger picture.[2]

X-Entertainment considered the Jumpstarters the first Transformers that were not cool.[3]

Topspin was featured in the 1985 Find Your Fate Junior books called Dinobots Strike Back by Casey Todd and Battle Drive by Barbara Siegel and Scott Siegel.[4]

Topspin is the brother of Twin Twist. When civil war broke out on the planet Cybertron between the Autobots and Decepticons, Topspin joined the Autobot cause.

When Decepticon leader Megatron and Autobot leader Optimus Prime disappeared in an accident with a space bridge, the Autobot and Decepticon forces splintered into smaller factions. Topspin joined up with the Wreckers under the leadership of Springer. Springer led the Wreckers to a mission in the Tagan Heights, suspecting that Ratbat's Ultracons were attempting to secure the Heights. His team discovered that Devastator had joined the Ultracons. The Wreckers faced Devastator in combat, but were defeated. The battle was then joined by the Protectobots, who formed Defensor (Transformers: The War Within - The Dark Ages #2). After Devastator was defeated, the Wreckers retreated.

Eventually Ultra Magnus was able to reunite the Autobot factions, and Topspin rejoined the Autobots.

Topspin in as a character in Dreamwave Productions Micromasters mini-series. In issue #1, "Destined For Nothing", Countdown and Groundshaker return from space to find the Autobot base largely abandoned. The first Autobots they encounter, Topspin and Twin Twist seem surprised to see them, and more surprised that Optimus Prime isn't with them.[5]

After the Great Shutdown Topspin and Twin Twist served as bodyguards for Shockwave, but were secretly loyal to Ultra Magnus. They later battled a rampaging Menasor alongside Defensor, the Omnibots, Roadbuster and Whirl. Topspin later joined Grimlock in battling Shockwave's troops.

Topspin appeared in issue #2 of IDW Publishing's The Transformers: Stormbringer mini-series. Topspin and the other Wreckers fought on the planet Varas Centralus in the Kol system when Optimus Prime redeployed the Wreckers for a mission on Cybertron. He fought the cultists under Bludgeon and later fought Thunderwing himself (in defiance of Springer's orders), blasting Thunderwing's leg and narrowly avoiding being crushed. He was later seen inspecting Thunderwing's inert corpse.

Topspin appeared in Spotlight: Doubledealer where he was among the Autobots fighting Thunderwing on the planet Corata-Vaz.

Topspin later appeared in "The Last Stand of the Wreckers," where it was revealed that he had a "branched spark" with his brother Twin Twist which resulted in "vicarious perception," meaning that when one brother felt pain, the other could feel it, too. When the Wreckers went to try and liberate Garrus-9 from the sadistic rule of the rogue "Phase 6" Decepticon named Overlord, Twin Twist was captured and tortured and Topspin felt it. Topspin was on the side mission to download the information contained in the massive supercomputer/tribunal Aequitas, which required the voluntary donation of one's spark to access. In an effort to spare his brother any further suffering, he sacrificed his spark to Aequitas, saying "If we're gonna die, bro, let's at least do so with some semblance of dignity." This resulted in both brothers dying at the same time, providing the needed Aequitas access and depriving the Decepticon torturer of further sick delight.

While Topspin only appeared as a single page biography in the US Marvel comic series, he appeared in several issues of the Marvel U.K. comics. He was part of the Wreckers for many of the Marvel stories, taking part in such missions as Operation: Volcano, a trip to Earth to apprehend the future Decepticon Galvatron (which was foiled by the presence of Cyclonus and Scourge) and stopping the mad scientist Flame's plan to turn Cybertron into a warworld. It was during a later mission to stop Galvatron (at the centre of a rift in time and space) that the Wreckers encountered Galvatron and his ally - a clone of Megatron, who literally blew Topspin's head off.

Topspin is a Jumpstarter, an Autobot from the second year of the Transformers toy line whose gimmick was a pull back motor and the ability to transform himself.[6] He transforms by releasing his spring-loaded legs, which flips him over, landing on his oversized feet. The toy that became Topspin is from the Diaclone toy line in Japan made by Takara. Some versions of Topspin sport the letters D.A.R. on the decals, indicating his original name, Diaclone Attack Robo. Topspin was recolored into the Generation 2 Decepticon Robot-Man X, made by Hasbro partner Antex.
The Transformers Jumpstarters toys were the subject of a lawsuit by Hasbro in 1985 where they sued a toy manufacturer for selling toys based on their design. Hasbro won the suit.[7]

Turns from robot to drill tank and driver.

Comes with a Headmaster and Targetmaster Peaceman (Peacemaker).

Topspin has the unusual ability to manipulate sparks, and can move them from one body to another. He combines with the other 4 Transformers Collectors Club membership combiner exclusives to form Nexus Prime.

He had a biography printed in issue 25 of the Transformers Collectors Club magazine.[9]

Something happened to Topspin a long time ago; something he only remembers as pain, and terror, and a landscape of twisted, shifting metal lit by the strobelight chaos of laser fire through rolling smoke. It is the last time Topspin remembers feeling anything.

Eons later he found himself drifting, alone, though the vast darkness. Lost for years, he slowly ran out of energy, and his systems shut down one by one. Eventually, his inert body plunged through a wormhole and ended up on one of the transit pads in Axiom Nexus.

Handed off by processing authorities to Alpha Trion, he awoke to find himself staring into the face of another natural leader. Never before had he met a being with such overwhelming force of personality, or such deep conviction. Here was the leader that would guide him to what he sought.

Alpha Trion saw instantly what Topspin was; after all, he'd been waiting for someone like him since arriving in Axiom Nexus. He saw in Topspin the fruition of all his grand goals, and immediately set his plans into motion. He promised Topspin all he could want and more. Telling the plain truth for perhaps the first time in decades, he told Topspin that the reward he sought for so long waited just beyond the veil of the bleed, on Alpha Trion's home world.

Unique Quality: Has the unique ability to move a spark from body to body and can even split a spark into two or more pieces without destroying it.

Topspin first appeared in the Transformers Collectors Club comic story Transcendent part 3 as a Decepticon who works for Alpha Trion as a lab technician. He followed Alpha Trion when the old Autobot lead his followers to rescue Breakaway from the Transtech authorities and escaped with them to Alpha Trion's homeworld, Shattered Glass Cybertron.[10]

In Reunification the escapees returned to Alpha Trion's lab, where they were joined by several Autobots and Decepticons from his home world that were loyal to him. Alpha Trion killed the Autobot Downshift, who discovered their lair. Although Alpha Trion claimed that Skyfall was shot in the escape by the Transtechs, Breakaway noticed that the wound was cause by a blade like Alpha Trion's. Alpha Trion then ordered his forces to restrain Breakaway, Landquake and Topspin.

After the Shrouding Topspin became Spinaway.

Topspin is a redeco of Energon Blackout and Storm Cloud. According to the Transformers Collectors Club this figure was limited to 3000 pieces.

Topspin likes hard jobs that leave him dented. He is very tough, but has below-average intelligence. Unlike his partners, Topspin has no speaking lines in the film. His weapons are two mechanical claws and two guns on his shoulders.

In The Last Knight, Topspin somewhat inexplicably sports Leadfoot's head. This may be because, as Topspin had no dialogue in Dark of the Moon, his own head model had never been rigged to speak, but this is purely conjectural.

Though upon the film's release, he was credited as "Volleybot". Initially leaving it unclear whether or not he was meant to actually be a new character or Topspin. A later Transformers Fan Favorite poll held on the Transformers Movie web site credited Topspin as appearing in both Dark of the Moon and The Last Knight, along with using a picture of Volleybot as his mug shot, confirming that Volleybot is Topspin.[11]

He is sometimes called Volleybot.

Topspin, Leadfoot and Roadbuster are a team of Autobot engineers called the Wreckers, who came to Earth in their ship the Xantium which carried other Autobots, including Sideswipe. NASA took possession of their ship and Director Mearing mentioned they were rarely let off base due to their behavior. When Sentinel expelled the Autobots, the Wreckers prepared the Xantium for launch, but Starscream destroyed their ship as it was leaving. In the battle in Chicago, Topspin and the other Wreckers killed the pilot of a Decepticons fighter, and revealed to Sam that they had hid in a booster rocket which detached before Starscream attacked. When Shockwave attacked their convoy and Optimus lost his trailer, they created a diversion so that Optimus could retrieve it. Later they helped Optimus untangle himself and were among the surviving Autobots at the end of the film. 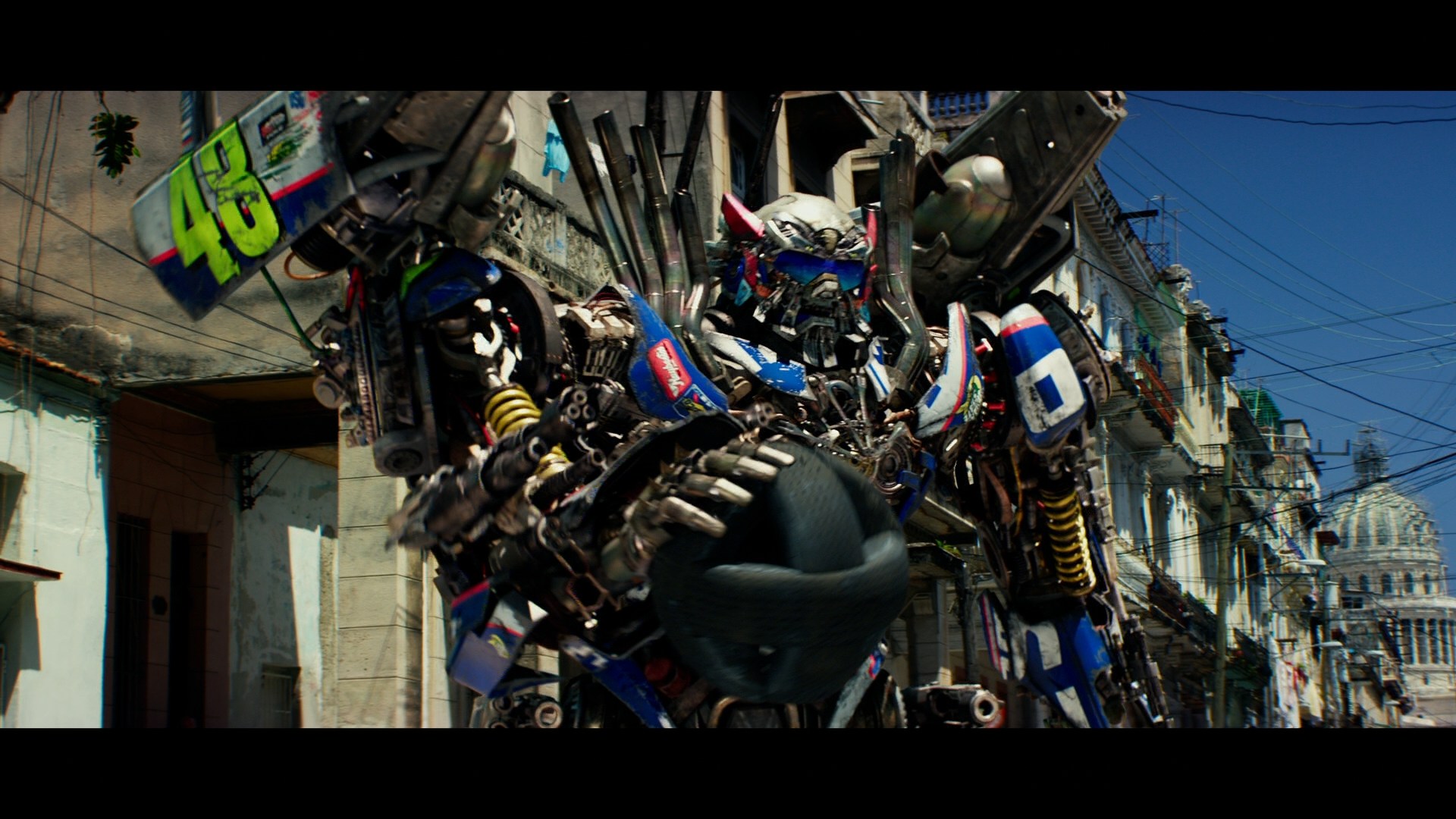 A Topspin in The Last Knight.

Years later, after breakup team of The Wreckers because of the Leadfoot's death. Topspin, who now grew a beard, was among several Autobots that were given asylum in Cuba, where he constantly pestered Seymour Simmons to play volleyball with him. At one point, he had been pestering Simmons during an important phone call with someone, which annoyed Simmons to say the least. Still, once the call was over, Simmons went to the beach with him.

All toys of this character are officially licensed from General Motors and feature a NASCAR holographic seal, making them official NASCAR merchandise.

A small transforming toy of Topspin aimed at younger children. This toy automatically transforms from race car to robot when placed upright, as a button on the rear end deploys the robot parts when pressed against a flat surface.

A new Legion (formerly Legends) mold of Topspin. Due to licensing and size limitations, only the Lowe's logo on the hood, the Sprint Cup Series logo on the sides and the #48 decals on the roof and sides appear on the car mode.[12]

A new mold of Topspin. His Mech Tech weapon is a blaster with a retractable claw. The head sculpt is designed to resemble a stereotypical Redneck NASCAR fan, sporting a Mullet. Unlike the Cyberverse Legion figure, Topspin's car mode is depicted as fully armored, with robot parts and weapons sticking out of the car body.[13]

A gray/black redeco of the Deluxe figure.[14]

Topspin is a member of the Wreckers who turns into a Cybertronian space shuttle.

A redeco of Generations Deluxe Blast Off with a different head sculpt.
Combines with Impactor, Roadbuster, Twin Twist and Whirl to form Ruination.[15]