Leader-1 is a fictional character from the GoBots series. Leader-1 is the leader of the heroic Guardians GoBots and was introduced in 1983.

In the animated series Challenge of the GoBots, Leader-1 is the leader of the Guardians.[2] He is a brave leader who cares deeply about his people. He believes not one person should be in charge. He supports the democratic system of the Guardians. This led his former friend, Cy-Kill, to break away from the Guardians. He took command of the evil Renegades and became Leader-1's worst enemy.[3][4]

Leader-1 was named among the "5 GoBots That NEED to be in the Proposed GoBots Movie" by Kevin Hellions at underscoopfire.com.[5]

All Friendly GoBots hail the fearless Leader-1, the leader of the Security Force. Leader-1 is as brave and intelligent as they come. He has an arsenal of weapons in store for Cy-Kill's evil gang.

As leader of the Guardian forces, Leader-1 always manages to think of a way to foul up the Renegades' evil plans. One day his job will be done and Cy-Kill will be safely locked away. But until then, Leader-1 must use all his knowledge and skills to protect both Earth and GoBotron!

He can fly, project energy blasts, and project a force field (which rapidly drains his power reserves). He can change into an F-15 Eagle. He has been known to use Guardian power suits that increases his speed and strength.[6]

He was picked as the 2nd worst Transformer of all time by X-Entertainment in April 2001.[7]

Challenge of the GoBots

Leader-1 first appears in the pilot episode of Challenge of the GoBots, "Battle for GoBotron", as leader of the Guardians.

Leader-1 appeared in "Return to GoBotron" episode 11. He was given one of the Power Suits by the Last Engineer, which featured enhanced speed and strength. He combined with the other suits and the Last Engineer's ship to form the Power Warrior Courageous and defeat a fleet of Renegade Thrustors.[8] 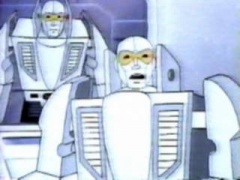 Leader-1 and his robot duplicate in Doppelganger 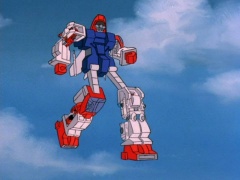 Courageous in Challenge of the GoBots episode 29, "Ultra Zod"

In the episode 34 "Scooter Enhanced" Scooter and Small Foot join Nick and A.J. to watch a car stunt show which is attacked by Crasher, BuggyMan and Fly Trap. Small Foot fights Buggyman and defeats him, but the Renegades gain the upper hand. The Guardians are rescued by Leader-1 and Turbo who arrive in Power Suits. Cy-Kill vows to gain Power Suits for the Renegades. Scooter decides he needs more firepower, so he has Professor von Joy remove his damaged holo projector in favor of a blaster unit. Screw Head, Bad Boy and Cop-Tur are sent to attack Unecom bases and distract the Guardians while Cy-Kill, Crasher and Scorp attempt to take the suits from the Guardian Command Center. Small Foot and Scooter are able to delay the Renegades until Leader-1 and Turbo return to chase away the Renegades. Realizing he was a better Guardian with his holo projector, Scooter has it reinstalled.[13]

Leader-1 appears in "Auto-Madic" episode 33, where he dons a Power Suit and helped form the Power Warrior Courageous, which defeats Puzzler.[14]

In episode 35, "Tarnished Image" Doctor Go creates a device that allows the Renegades to appear like Guardians. Cy-Kill, Crasher and Cop-Tur disguise themselves as Leader-1, Scooter and Turbo and go on a rampage on Earth while the real Guardians are sent on a fake rescue mission. When the Guardians return they are banished from Earth by the humans. The Guardians are eventually able to prove the Renegades staged the attacks, chase them off and capture Doctor Go.[15]

In episode 43, "The Seer" Cy-Kill and his minions Block Head, Cop-Tur, Crasher and Pincher kidnap a young blind psychic named Shaun Roberts and his mother from Unecom with the help of the human traitor Major Benedict. Cy-Kill uses the brain stormer to read the boy's mind. Shaun and his mother are rescued by Leader-1, Scooter, Turbo and Van Guard. An overload by the brain stormer robs the boy of his psychic powers and he is returned home safely.[16]

Leader-1 appeared in episode 47, "Destroy All Guardians", where he helped form the Power Warrior Courageous to stop a group of cloned and mutated prehistoric reptiles from attacking Japan.[18]

GoBots: Battle of the Rock Lords

In the 1986 film GoBots: Battle of the Rock Lords Leader-1 lead the Guardian GoBot forces who aided the Rock Lord Boulder on the planet Cordax.[20] 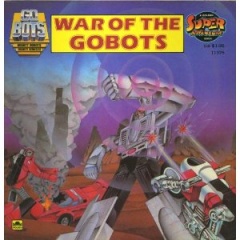 Leader-1 on the cover of War of the GoBots

Leader-1 appeared in the 1984 Western Publishing Company story War of the GoBots by Robin Snyder. [21]

Leader-1 appeared in the 1985 Western Publishing Company story Race to the Stars by Jack Harris.[22]

Leader-1 was featured in the 2016 Ask Vector Prime story Echoes and Fragments, set during the events of The Transformers: The Movie. The manipulations of the evil Gong and Sideways resulted in various GoBots swapping places with characters during the events of that film. Leader-1 took the place of Optimus Prime in the plot. Helped win the battle of Guardian City, but then died shortly afterward due to injuries from Megatron. He passed on the Guardian Matrix of Leadership to Major Mo.[23]

Leader-1 appears among the group investigating the cataclysm destroying their universe in Fun Publications story Withered Hope. Once he learns the cause of the destruction from Doctor Braxus he orders a team of GoBots in investigate. [24]

Leaser-1 appeared in the Transformers: Renegade Rhetoric episode 1 story "Rebels Without a Circuit" by Fun Publications.[25]

Leader-1 appeared in the episode 4 story "Countdown to Annihilation".[28]

Leader-1 appeared in the episode 7 story "The Hawks of Space Part 1" by Fun Publications. In the story he lead a diversionary assault on the Renegade base on the dark side of the moon.[29]

Leader-1 appeared in the episode 9 story "Cy-Kill For President".[30]

Leader-1 appeared in the episode 35 story "Trash and Treachery". In the story he lead a counter attack when Zero attacked the Guardian Council with super-algae, but was captured. Leader-1 was able to radio Scooter with instructions as astrobeam in garbage from Earth, which attracted the super-algae, freeing the Guardians. Once free, Leader-1 chased Zero into space.[34]

Leader-1 appeared in episode 52, "A New Suit For Leader-1", where a fake Power Suit temporarily turned him into a Renegade GoBot.[35]

In the episode 58 story "Opportunity Knocks Part 2" Cy-Kill chronicled his return to "Level 1", his home universal stream, just as the Guardians were staging an attack on Rogue Star. Cy-Kill and his Renegade recruits from Axiom Nexus joined Fitor, Spoons and Stretch in repelling an attack by Courageous, Leader-1, the Guardian Command Centers and the new Guardian Academy graduates Beamer, Guide Star and Sky Fly. During the battle Monsterous was able to best Courageous and tore though the Command Centers, but a ploy from Leader-1 tricked Cy-Kill into unleashing a massive blast which struck Monsterous, shattering the combiner into his components. 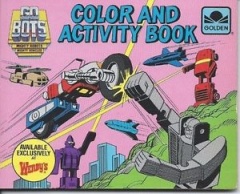 Leader-1 appears in the 1986 Golden Press story The Sea Vaporizer. In the story Guardian Command Center is stationed on Earth's moon as Beamer plays games on the space scanner. An alert sounds and Leader-1 discovers the Earth is being enveloped by a steam cloud. He sends Guide Star to investigate. Guide Star discovers a beam of light that is boiling Earth's oceans and follows it into space where they discover the Renegade GoBot ship Thruster, but contact with Guide Star is cut off. Leader-1 takes up the investigation, and Cy-Kill uses a space mirage projector to conceal his presence. Leader-1 works past the mirage to discover a space station where Cy-Kill, Crasher and Cop-Tur are using a giant lenses to focus the sun's rays into a beam to boil away Earth's oceans, leaving the planet uninhabitable by humans. Cy-Kill attempts to blast Leader-1 out of the sky, but Leader-1 is able to neutralize the beam with a blast of his own. Cy-Kill sends Pow Wow and Crasher to attack Leader-1. They attempt to ram the Guardian, but Leader-1 avoids the attack causing the two Renegades to hit each other. Leader-1 frees Guide Star and deflects an attack by Cy-Kill, blowing out one of the Renegade leader's tires. The beam stopped, the oceans of the Earth are saved.[37]

Leader-1 appears in the 1986 Golden Press story Ambush in Space. In the story the Guardians decide to take a vacation on one of the resort planets. They take the Command Center and their first stop on a refueling planet, but after taking off their engines conk out thanks to micro dust in the fuel placed by Cy-Kill. The Command Center is drawn to the planet Fintergand by an electromagnet operated by Cy-Kill. Once forced to land Pow Wow attacks Scooter, but his attack is deflected by a boulder thrown by Sky Fly. Cop-Tur attacks Leader-1 with rust rockets, but he tricks the rockets into following him to Cy-Kill. Cy-Kill gets hit by the rockets and rusts in place. Pow Wow attempts to ram Beamer, but Beamer flies out of the way at the last moment, causing Pow Wow to hit Odd Ball instead. Breez attempts to hide from the Guardians in a crater, but Guide Star and Sky Fly shoot "obmug" into the crater. The Guardian GoBots sing their victory song.[38]

Leader-1 lead the Guardian forces in "A Spy Among Us" by Telepictures Publications. In the story Cy-Kill had Night Fright attack Super Couper and plant a bugging device on the Guardian. Cy-Kill used the device to overhear information about an incoming robot freighter filled with Zintrinium. As the Renegades continued to anticipate the Guardian's moves, Leader-1 reasoned they were bugged and was able to lead the Renegades into a trap in the freighter's hold by giving them false information. Once the Renegades were trapped inside Leader-1 had Scooter program the ship to fly to the Crab Nebula, giving the Renegades a nice little vacation.[40]

Leader-1 appeared in the story "El Genio Y Su Hijo" (The Genius and Its Son) from the Argentina GoBots comic #11.[41]

Guide Star and Sky Fly were among Leader-1's troops in the 1985 story "Moonstrike", a comic strip published on a Wendy's Kids Meal box. In the story Cy-Kill threatens to shoot Leader-1 with a magnetizing ray gun. Guide Star spots a meteor and deflects it at Cy-Kill. Damaged, the Renegade leader retreats to Thruster.

Leader-1 was the playable character and clones of were among the cast in the video game Challenge of the GoBots for the Sinclair, Amstrad and Commodore 64.[42]

Leader-1 was parodied in the CollegeHumor animated sketch "Transformers Go Hollywood". In the sketch, Optimus Prime and Megatron talk about their live-action film's success at a cafe when they are met by Leader-1, who works as a waiter in the cafe. Leader-1 is heavily ridiculed by Prime and Megatron as he attempts to give them the script to his proposed film project. He rushes to the restroom and talks to Johnny 5 before locking himself in a toilet stall to cry over his insults.[43]

Leader-1 has appeared in the animated comedy series Robot Chicken.[44]

Leader-1 appeared in Lil Formers #88 "Auditions I" by Matt Moylan, where he auditioned for a Transformers film as Superion.[46]

Leader-1 appeared in Lil Formers #97 "Seekers" by Matt Moylan, where he wanted to be the next exclusive Seeker release.[47]

Leader-1 appeared in Lil Formers #154 "Robo-Film" by Matt Moylan, where he professed to have more dignity than a "Bayformer".[48] 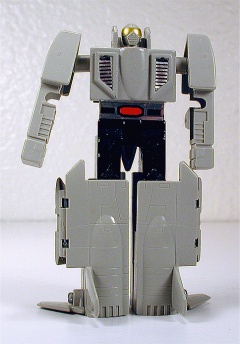 The toy of Leader-1 was originally Bandai's Eagle Robo from their Machine Robo toyline.[49] The gray Leader-1 was also sold as part of a limited edition gobots 3-pack [50] with the other 2 Guardians being Flip Top and Turbo.
Some versions of Leader-1 came packaged with a free 3-D GoBots sticker.

Leader-1 was sold in a gift pack with Turbo and Flip Top.

The Tonka version was originally released in gray like Bandai's, but later versions were changed to a blue and white color scheme.
This color represents the character as they appeared when enslaved by the Overseers in "Chains of Doom".