Jetstrike is a fictional character and third-party Transformer homage to Generation 1 Starscream made by Play With This Too and Prize Inside in 2017.

Jetstrike is an intergalactic heroic character created by Play With This Too. He is a member of the Lost Protectors. He has a retractile Battle Shroud which protects him from sensory attacks. He wears a Babel Bracer which translates all languages and Tachyon Telegraph which can send and receive transmissions with an interplanetary range. He has a Tech Drone companion named R-Ject who turns into a jet fighter.

Jetwash was revealed at TFcon Chicago 2014 where art was placed on display, and later is appeared in the Third-Party Panel.[1]

It was later announced his name was changed to Jetstrike.

"Jetstrike, Ankhor and Ironstrike will all have the option for one person to own the right to have their face placed on the figure regardless of age, gender or ethnicity."

In July 2015 Play With This Too jokingly asked on their Facebook page if Maqua should be one of the one of the 2 additional heads provided with Boneyard and Jetstrike.[3] The design for the Tech Drone would be more like Microns. At the end of the month they revealed a render of the sculpt for Jetstrike's head.

Jetstrike was one of the ten initial figures available as a reward for the unsuccessful Boneyard & Jetstrike Action Figures Kickstarter campaign, which began in September 2015.[4]

According to TFcon Chicago 2014 coverage on TFW2005.com by Sol Fury Jetwash may later be called Jetstrike and is going to have an option for people to buy their own head on the toy.[6]

The TFYLP podcast for October 25th, 2014 interviewed Rik Alvarez and Aaron Archer. They talked about the main villain Ancient Astronaut, the vampire villain Bloodbath, the gladiator hero Boneyard and the flying hero Jetwash.[7]

The Repacked Podcast podcast for October 28th, 2014 discussed Aaron Archer and Simon Furman joining Play With This Too as well as the toys of Goldminer and Jetwash in the news. One host loved the designs, but another worried that Hasbro would not allow them to go forward with the Kickstarter.[8]

The Good Morning, Cybertron! podcast for October 29th, 2014 discussed the reveal of Bloodbath, Jetwash and Head Shots Vol. 1 in the news. The hosts were tempted to get them.[10]

The Shattered Cast Uncut podcast for October 30th, 2014 discussed Ancient Astronaut, Astroblast, Bloodbath, Boneyard, Desolataur, Jetwash and Head Shots Vol. 1 through 3 in the news. The hosts liked the Pretender homages, but did not understand the Head Shots. They said some of the designs reminded them of characters from Inhumanoids, Men in Black and Ren and Stimpy. They said Jetwash reminded them of the Transformers character Metalhawk.[11]

The [email protected] podcast for November 1st, 2014 discussed the Ancient Astronaut, Bloodbath, Boneyard, Desolataur, Flarestrike, Jetwash and Head Shots Vol. 1 through 3 in the news. They said Xando looks like a G.I. Joe alien and talked about Aaron Archer and Simon Furman joining Play With This Too.[12]

The Cybercast podcast for November 22nd, 2014 interviewed Rik Alvarez. He spoke about Play With This Toosday reveals, Astroblast, Bloodbath, Desolataur, Ironstrike, Jetwash, The Mighty Muscules - Son of Testosteros, Tri-Gorr and the Play With Yourself Box Set. He announced the villains of his series would be called Heretics.[13]

Rik Alvarez was interviewed by Charles and Candice in the November 25th, 2014 episode of the Super Epic Podcast Theater. In it they talk about Candice joining the Play With This Too team, her Head Shots and the art of Jetstrike she is doing. They mention the toys for Bitemark, Catastropheles, Flarestrike, and the Mighty Muscules.[14]

The [email protected] podcast for August 13th, 2015 discussed Boneyard and the the Jetstrike prototype in the news. They thought Jetstrike was pretty cool and commented on the torso crunch, but thought the legs looked small and the arms looked low. They also mentioned the customizing figures.[15]

The Repacked Podcast podcast for August 25th, 2015 discussed Jetstrike and Wastelander in the news. One of the hosts, Albie Lim, talked about his work on the coloring of the renders. He said designs on the wings were meant to depict Jetstrike's mace crashing to earth.[16]

The Cybercast podcast for September 5th, 2015 discussed Boneyard and Jetstrike in the news.[17]

The TF Insane Asylum podcast for September 8th, 2015 discussed Jetstrike and Wastelander in the news.[18]

Rik Alvarez appeared on the TFYLP Podcast for October 15th, 2015 where he displayed the prototype figures for Boneyard and Jetsttike, and premiered the two "super secret parts" that were to come with Jetstrike, a set of hands with the middle fingers extended.[19] 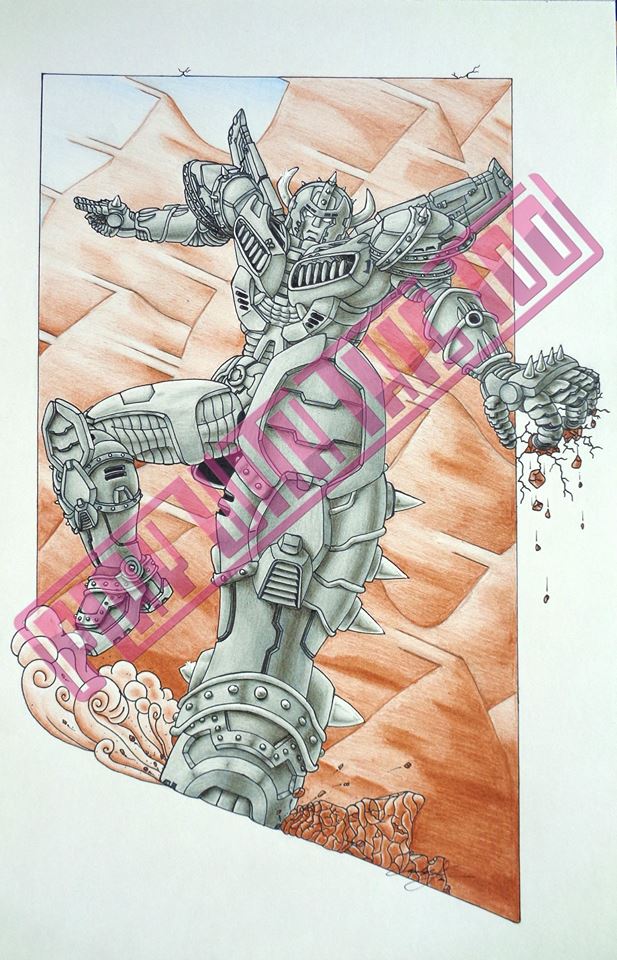 Jetstrike is a member of the Lost Protectors. He wears a living Aegis battle suit powered by the primal forces of the universe. It grants him enhanced strength, durability, longevity and the ability the fly, as well as having numerous weapons. His suit also provides breathable air and protection from harsh environmental conditions including under water and the vacuum of space. He has a Tech Drone companion named R-Ject.

For ten millennia the Striker Fleet fought in the galactic arenas to protect life from the forces of evil, going so far as to turn evil's power against the Null Miasma itself. The Fleet brooks no defectors, deserters, or thieves and only one being has ever eluded Flarestrike's trackers: the man calling himself Jetstrike.

A small time thief and con artist, he found the body of the original Jetstrike, still clad in its living Aegis armor, on a distant desert world. Donning the armor himself, the thief was shocked to find the living armor accepted and bonded to him. For a time "Jetstrike" ran cons on frontier worlds, posing as a hero to get rewards and resources before fleeing to the next colony, with Flarestrike hot on his trail the whole time. It was raw luck that crossed his path with Boneyard and his Lost Protectors. Forced to pretend to be the former Jetstrike's promoted squire, Jetstrike joined their ranks for protection and to take their armor for himself if they fall in battle.

As Gate Keeper, Boneyard knows Jetstrike's ambitions, but he knows the Aegis he wears and believes there is hope for Jetstrike. This brash, wild spirit may be the Scion of the Sacred Flame, as prophesied by Catastropheles' himself. The Aegis limits Jetstrike's access to his power, rewarding him with more when his better nature shines through. Boneyard sees Jetstrike's skill and power grow with hope, but Jetstrike fears the day his new comrades discover his secret.

A 1:48 scale figure of Jetstrike by Prize Inside. Available on their Shapeways store in a variety of colors. This version of the figure has Boneyard style shoulder pads.[20]

A face for Titan Masters that looks like Jetstrike's human head in helmet by Prize Inside. Available on their Shapeways store in a variety of colors.[21]

A face for Titan Masters that looks like Jetstrike's robot head by Prize Inside. Available on their Shapeways store in a variety of colors.[22]

A release of Jetstrike in all white plastic with no paint. This figure is also known as Blankstike.

A release of Jetstrike in the original Starscream colors.