From WikiAlpha
(Redirected from Headstrong)
Jump to: navigation, search

Headstrong is a Predacon who turns into a rhinoceros from the Transformers franchise.

Headstrong transforms into an Indian rhinoceros. Headstrong forms the right lower leg of Predaking. He is unbelievably stubborn and does not take advice from anyone. However, Headstrong is probably the weakest of the team and extremely insecure about it. Voiced by Ron Feinberg.

Like the untamed forces of nature, the Predacons are ferocious animal robots who lash out with fury. Swift, savage and always relying on animal instinct, the Predacons explode into action. There's Divebomb, the eagle who can spot a target from a mile up in the sky, Rampage, the tiger who can leap 500 feet, Headstrong, the rhino whose horn can puncture 8 feet of solid rock, Tantrum, the buffalo who loves to use brute force, and there's the Predacon commander, Razorclaw, whose claws can rip through steel. Together, they combine into a hair-trigger horror, the giant robot Predaking. As a warrior, Predaking has no equal. As a weapon, he has no known weaknesses. He can lift 500 tons without even straining a circuit. With the help of the Predacons, no planet is too wild or untamed for the Decepticons to conquer. The Autobots are forced to find new defenses against the mechanical menace, Predaking.

The Predacons made their debut in the year 2005, as the Decepticon/Quintesson alliance began its attack on the Autobots on both Earth and Cybertron. The Autobots Blurr and Wheelie and the human Marissa Faireborn are stranded on Io, one of Jupiter's moons while attempting to deliver the transformation cog that would allow the Autobot battle station, Metroplex, to fight and transform as needed. Communications officer Blaster attempts to contact Cybertron for reinforcements, revealing his allies' plight. The transmission is intercepted by the Quintessons, however, and upon learning the location of the cog, they dispatch the Predacons to Io to ensure it will not reach Earth. After an initially poor showing in their individual robot and animal modes, the team merges to form Predaking. They are confronted by the massive Autobot Sky Lynx and bested, leading to an enmity between the two. The Predacons are in their element for their first mission in 2006, operating in the wilds of the planet Dredd, where they again battle Sky Lynx and several other Autobots. They are defeated when they are buried in an avalanche created by the planet's native Chaos monster. Later, they participate in the invasion of Paradron, with Divebomb pursuing escapee Sandstorm and Razorclaw co-ordinating the shooting down of the Autobot reinforcement vessel he returns with.

Later the Quintessons strike at the Transformers by animating the dreams of Daniel Witwicky. Having penetrated Cybertron's defenses for an unspecified mission, the Predacons attack Rodimus Prime, Ultra Magnus and Springer. Soon the whole group are attacked by monsters conjured from Daniel's subconscious. All on scene are forced to work together to survive. Razorclaw and Springer are captured by a dragon and are forced to team up to defeat the creature and escape, while the others face the threat of a giant Galvatron who injures Headstrong. With Daniel rescued, the damage sustained by Headstrong prevents the team from combining into Predaking, forcing them to flee.

While en route to Chaar at a later date, Predaking intercepts an unusual Quintesson signal and tracks it to a jungle planet, where the team comes upon a group of Autobots who have done the same and discovered an electronic journal recording Quintesson military transactions. The team merges into Predaking, who immediately targets Sky Lynx among the group, seeking revenge for his past defeats; Sky Lynx outmaneuvers the Decepticon, but, rather than best him in combat, has to get his fellow Autobots to safety. When the Decepticons then acquire the journal, Predaking is reluctant to retreat until having finished off Sky Lynx, but stands down in the face of Galvatron's wrath.

When the ancient genius Primacron unleashes his energy-absorbing creation, Tornedron, on the universe, Primacron's assistant seeks to foil his former mentor by amassing a team of "Primitives" - Transformers with animal instincts that can hopefully thwart Primacron's complexities. The Predacons are among the Transformers summoned from a battle on Earth's moon to a dead world at the center of the universe, where Tornedron confronts them. Refusing to run from him, the Predacons form Predaking and battle Tornedron, who takes the shape of a giant warrior, absorbing all energy Predaking throws at them until he has been drained of life. Of all the Primitives, only Grimlock survives, and is subsequently able to stop Tornedron and Primacron, restoring the Predacons and the others to life.

After participating in the Decepticon attack on Japan, the Predacons are among the Transformers infected when the madness-inducing Hate Plague sweeps the universe. The animosity bred by the plague does not prevent the Predacons from combining into Predaking and pursuing the uncontaminated Galvatron, however, only to be forced to retreat by a squad of uninfected Autobots led by Optimus Prime. When Prime subsequently releases the power of the Matrix, the plague is cured. 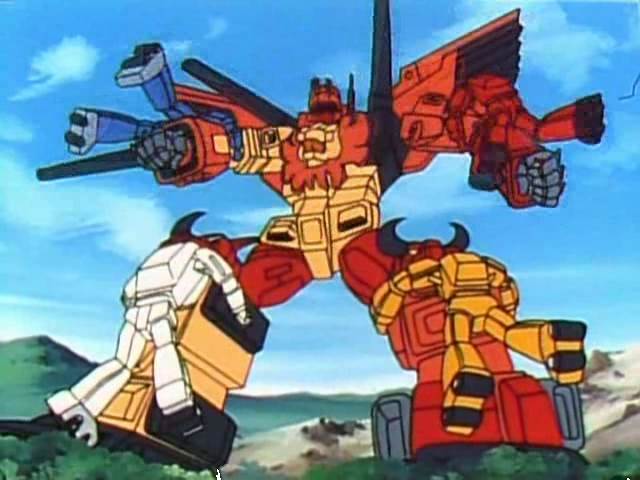 Predaking fights the Throttlebots Freeway, Chase, Searchlight and Goldbug in Transformers: The Headmasters

The Predacons continued to put in short appearances in 1987's Japanese-exclusive spinoff series, Transformers: The Headmasters, usually fighting alongside and against the other combiner teams-most notably the Trainbots in the form of Raiden-in various battles.

In 1990's Transformers: Zone, Predaking was one of the nine Decepticon generals in the service of the mysterious insectoid Violenjiger, and met his end when Autobot leader Dai Atlas cleaved his body in two (somewhat bizarrely revealing what appeared to be an organic brain within him).[1]

The Predacons would return in the third Devil's Due Publishing crossover between G.I. Joe and the Transformers. Without Megatron or Shockwave's steadying influence, the Decepticons had fallen apart in a series of internecine conflicts. One such was the Predacons taking on the Seacons. Hunting Nautilator, the Predacons were unable to prevent him calling for backup - Piranacon. The Predacons merged into Predaking and defeated their foe. Preparing to finish him off, Predaking was interrupted by a strange, tiny figure: Serpentor, a human military cyborg built with Megatron's memories. Using these memories to convince both combiners to join him, they then participated (along with the Stunticons) in the ambush that killed Bumblebee. They were then Serpentor's principal weapon, along with Piranacon and Menasor, in the attack on Capital City, where the three of them defeated Omega Supreme. They were among the Decepticon reinforcements that countered the G.I. Joe/Autobot jailbreak. Rampage was taken out by Grimlock. Razorclaw and Motormaster were the ones who stopped Prime's attack on Serpentor, beating him to near death. They were then slain by the Cobra Commander-controlled Serpentor.

Dreamwave Productions' 21st century re-imagining of the Generation 1 universe had little time to focus on the Predacons before the company's closure. With the exception of Tantrum, who made a brief appearance as part of Shockwave's attack on Iacon, the Predacons would not make an appearance in Dreamwave's Generation One Universe until late in the series. The five team members were once warlords on Cybertron who were cast into exile in space. Settling on Planet Beest, home of the Battle Beasts, the Predacons sank into a feral state and lived as inhabitants of that world for untold years, until Megatron arrived. Having been jettisoned into space by Starscream and restored from the brink of death by Wreck-Gar, Megatron now had his sights set on reclaiming the Decepticon leadership, and required the Predacons to bolster his army. Abandoning his personal weaponry, Megatron pursued Razorclaw through the jungle and soundly defeated him. Subsequently, he re-engineered the Predacons to give them the ability to combine into Predaking. Taking the Predacons to Cybertron, Megatron put Shockwave in his service again while the Predacons dealt with his Triple Changer minions; Razorclaw was forced to destroy the resistant Blitzwing. The group then headed to Earth to deal with Starscream, where Predaking defeated Bruticus. The players were now all assembled... but Dreamwave's bankruptcy and cessation of publication left future stories of the Predacons untold. 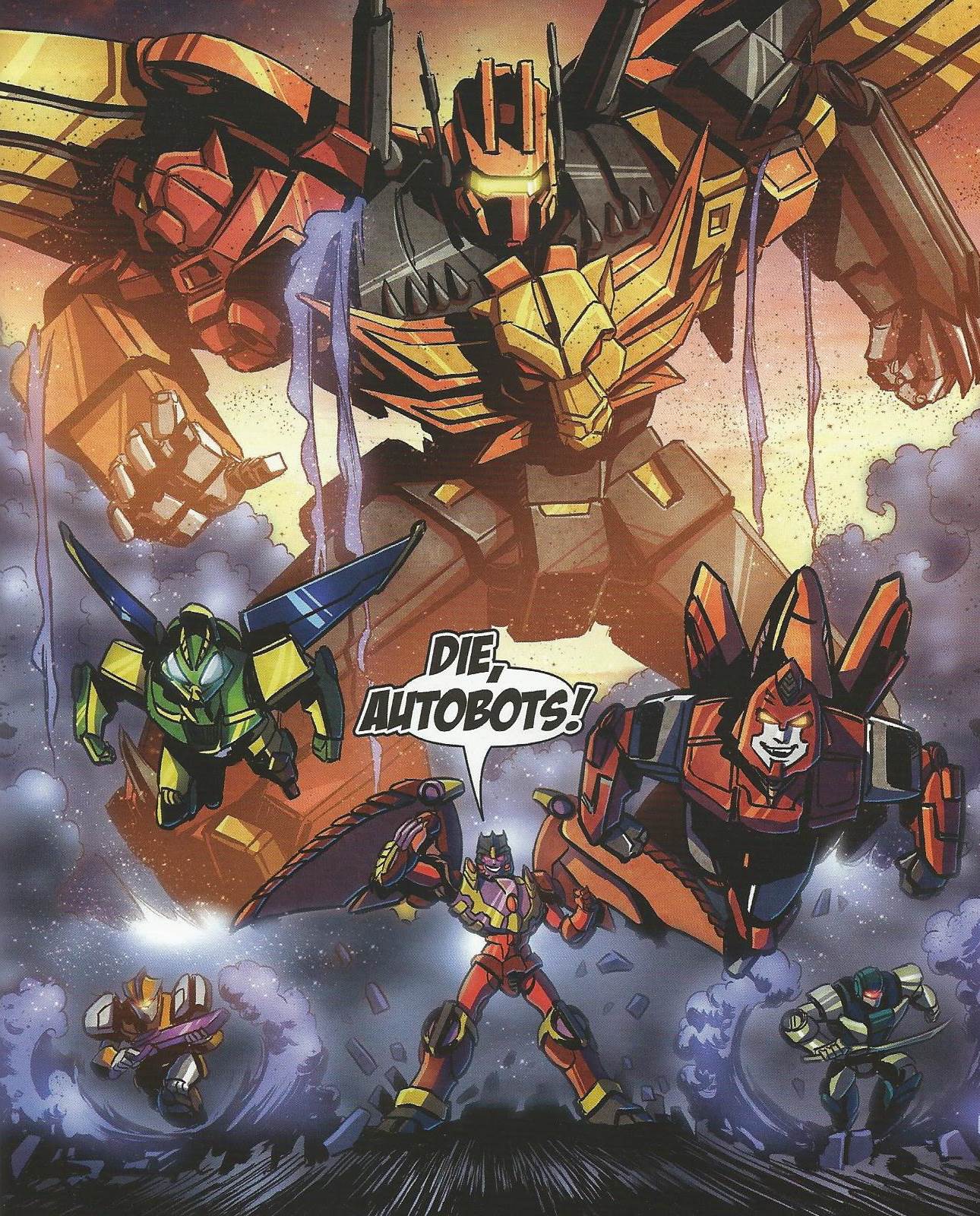 Megatron commands Attack Squad 3 in Transformers: Dawn of the Predacus

Predaking appeared the IDW Publishing BotCon 2016 story Transformers: Dawn of the Predacus. In this story Predaking appears under the command of Megatron at the end of the Great War. Megatron's forces attack Autobot Unit-2 under the command of Tigatron, destroying most of them. Later Predaking is confronted by Predacus, who kills Predaking, making it look like he committed suicide out of guilt for all the sparks he had extinguished.

On the planet Cybertron, some time before the departure of Optimus Prime and Megatron's crews and their subsequent four-million-year exile on Earth, the Dinobot-to-be Swoop went by the name "Divebomb," but when he was defeated in battle by an aerial Decepticon ace, the villainous victor claimed the name for his own - now, this Decepticon was Divebomb, and he eventually became a member of the Predacons. This particular piece of back story, however, would not be revealed until after the Predacons made their Marvel Comics debut, in the United Kingdom's exclusive Transformers comic, which interspliced its own unique material between reprints of the U.S. title. Here, the Predacons were summoned to Earth in 1987 and fitted with animal modes by Megatron in order to hunt Optimus Prime. Prime went against the Predacons alone (separated from the Autobots as part of a plan of his own to test their ability to function without him), using all his skill and ingenuity to survive, but as Megatron watched, the Predacons attacked him, having been ordered to do so by Megatron's rival for power, Shockwave. The Predacons then absconded, leaving Prime and Megatron to finish each other, but when Megatron transported them both to Cybertron, Shockwave dispatched the Predacons to find them. The team arrived back on Cybertron a little too late, as Megatron and Prime had returned to Earth, but an encounter with the Cybertron local Decepticon commander, Lord Straxus, had left Megatron with amnesia, unable to remember the Predacons' treachery.

The stage was set for the Predacons' appearance in the U.S. title, and appear they did, shortly after Optimus Prime perished in a virtual duel with Megatron. Megatron himself had begun to descend into paranoid insanity, and Shockwave summoned the Predacons back to Earth and had them pose as Autobots, planning to have them hunt Megatron as part of a scheme to once again seize command of the Decepticons from Megatron (the UK comic rewrote some of the dialogue in its reprint of this issue to make it appear to be the Predacons' second trip to Earth). The plan did not go smoothly, however, as Megatron defeated them all, even in their combined form of Predaking. Realizing that Shockwave was to blame, Megatron was about to kill him when he revealed that he had duplicated his mind to disc to guide the Predacons in their mission. Believing (accurately as it turned out) that this was how Optimus Prime had survived, Megatron apparently killed himself by blowing up the interdimensional spacebridge while standing on it. Shockwave was left as Decepticon commander, and the Predacons were absorbed into his Earth-based Decepticon army.

Headstrong-or rather his descendant-appeared in a new form in Dawn of Future's Past among the forces of Razorclaw.

A recolor of Transformers: Cybertron Backstop as Headstrong.