Dozer is a fictional character from the GoBots series. He is a heroic Guardian GoBot who turns into a bulldozer.

Dozer is a Guardian GoBot.[1]

Dozer was one of the names in a word find that had to be solved to win a copy of the Challenge of the GoBots video game from Your Sinclair magazine.[2]

Dozer would rather take a nap than waste time leveling the Enemy GoBots. But when the good guys need him, he's up and ready to flatten each and every one of the evil doers.

Like most GoBots, Dozer has numerous abilities because of robotic body. He can survive in space and is super-humanly strong and tough. He can fly in robot mode and project energy blasts from his hands. His body heals quickly when supplied with energy. He can turn into a bulldozer.

Dozen appeared in the Challenge of the GoBots animated series. He first appeared in episode 5, called "The Final Conflict."

In the episode 15 "It's The Thought That Counts" the Guardians set up a lab to test their power suits on Earth. With Defendor and Blaster patrolling the lab Professor von Joy and Path Finder test a new suit on Dozer. [3]

Dozer also appeared in the episode 51 "The Third Column."

Dozen appeared in the feature film GoBots: Battle of the Rocklords.

Dozer was among the Security Force team assembled by Leader-1 to capture Cy-Kill in the story Escape To Planet Earth.

Dozer appears on the cover of the book The Weeds of Calcheron.

In the story Cultural Appropriation by Fun Publications it was revealed that Rock Lords Saberstone, Slimestone, Stone Hook and Tombstone teamed with the GoBots Dozer, Good Knight, Hans-Cuff and Royal-T to explore 59th Level when the Cataclysm threatened to destroy the GoBots home universe.

Dozer was featured in the 2016 Ask Vector Prime story Echoes and Fragments, set during the events of The Transformers: The Movie. The manipulations of the evil Gong and Sideways resulted in various GoBots swapping places with characters during the events of that film. Bolt, Scratch, Dozer and Staks with power suits took the place of Grimlock, Slag, Sludge and Swoop in the story. During the battle for Guardian City they formed Courageous and faced Devastator.[4]

Dozer was mentioned in the Fun Publications 2015 Ask Vector Prime Facebook series when it was hosted by Cy-Kill. In one story Cy-Kill mentioned how he was once captured by Bullseye, Dive-Dive, Dozer, Dumper and Pumper. Although captured, Cy-Kill set his Thruster to self destruct, which injured Dozer and Dumper.[6] 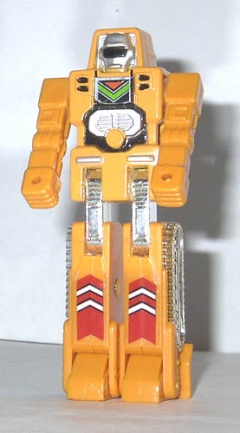 A release of Machine Robo Bulldozer Robo. Turns from robot to bulldozer. Comes with gun and bulldozer roof.