Crasher is a fictional character from the GoBots series. She is an evil Renegade GoBot introduced in 1983 who turns into a race car. Versions of her and characters inspired by her have also appeared in the Transformers franchise.

Crasher was one of Cy-Kill's most loyal Renegades, despite a having somewhat manic personality.

She is highly aggressive and will go anything to win a race.[1] One of her favored pastimes is participating in demolition derbies.[2] She is considered reckless.[3] Under interrogation, she admitted to having a crush on Leader-1 before the Guardians and Renegades began their struggle. [4] Crasher enjoyed GoBot demolition derbies and at one time had a crush on Leader-1.

Crasher's seeming state of near-madness effectively renders her fearless, and she has an ongoing grudge with the Guardian Turbo, rarely avoiding a chance to battle him. However, she tends to take any defeat or challenge very personally.[5]

According to Hasbro employees Crasher was the inspiration for the Decepticon Fracture.[6]

Crasher is the inspiration for the TFcon character Thrasher.

Crasher was named among the "5 GoBots That NEED to be in the Proposed GoBots Movie" by Kevin Hellions at underscoopfire.com.[7]

Crasher was number 9 among the "The Ten Best GoBots Ever Produced!" by Gnoll at dorkdroppings.com in 2015.[8]

Note: The original biography for Crasher depicted the Renegade as male.

In the war between good and evil, it's a race to the finish and Crasher will stop at nothing to win. When Crasher races against good guy Turbo, he breaks all the rules and the race becomes a demolition derby.

Like most GoBots, Crasher has numerous abilities because of robotic body. She can survive in space and is super-humanly strong and tough. She can fly in robot mode and project energy blasts from his hands. In additional to his her hand-mounted blasters, crasher used an attack wherein she stamps her foot on the ground to create a powerful energy discharge that could track its victim. Her body heals quickly when supplied with energy. She can turn into a Porsche 956.

Crasher in Challenge of the GoBots

A female Renegade GoBot, she was a regular character in the Challenge of the GoBots cartoon. She was voiced by Marilyn Lightstone.

In episode 15, "It's The Thought That Counts", Cy-Kill, Cop-Tur, Crasher, Geeper-Creeper, Pincher, and Snoop attack a lab, but it is defended by Leader-1, Professor von Joy, Blaster, Dozer, Dumper, Road Ranger, Scooter, Scratch and Turbo. Although the Guardians were winning the battle, an accidental backfire from Professor von Joy's weapon allows the Renegades to escape.[10]

Crasher appears in episode 18 "Trident's Triple Threat". Small Foot's impulsiveness runs away with her in this episode when she tries to take on three Renegades at once. Crasher, and Cop-Tur beat her up so severely that Turbo has to carry her back to their base in his arms.[12]

Crasher appeared in episode 26, "The Quest for Roguestar".[13]

In the episode 34 "Scooter Enhanced" Scooter and Small Foot join Nick and A.J. to watch a car stunt show which is attacked by Crasher, BuggyMan and Fly Trap. Small Foot fights BuggyMan and defeats him, but the Renegades gain the upper hand. The Guardians are rescued by Leader-1 and Turbo who arrive in Power Suits. Cy-Kill vows to gain Power Suits for the Renegades. Scooter decides he needs more firepower, so he has Professor von Joy remove his damaged holo projector in favor of a blaster unit. Screw Head, Bad Boy and Cop-Tur are sent to attack Unecom bases and distract the Guardians while Cy-Kill, Crasher and Scorp attempt to take the suits from the Guardian Command Center. Small Foot and Scooter are able to delay the Renegades until Leader-1 and Turbo return to chase away the Renegades. Realizing he was a better Guardian with his holo projector, Scooter has it reinstalled.[14]

In episode 35, "Tarnished Image" Dr. Go creates modified mini-stealth devices that allow the Renegades to appear like Guardians. Cy-Kill, Crasher and Cop-Tur disguise themselves as Leader-1, Scooter and Turbo and go on a rampage on Earth while the real Guardians are sent on a fake rescue mission. When the Guardians return they are banished from Earth by the humans. The Guardians are eventually able to prove the Renegades staged the attacks, chase them off and capture Dr. Go.[15]

In episode 43, "The Seer" Cy-Kill and his minions Block Head, Cop-Tur, Crasher and Pincher kidnap a young blind psychic named Shaun Roberts and his mother from Unecom with the help of the human traitor Major Benedict. Cy-Kill uses the brain stormer to read the boy's mind. Shaun and his mother are rescued by Leader-1, Scooter, Turbo and Van Guard. An overload by the brain stormer robs the boy of his psychic powers and he is returned home safely.[16]

Crasher appeared in Challenge of the GoBots episode 63, "Terror in Atlantis".

Crasher was among the Renegade GoBot forces who aided the Rock Lord Magmar on the planet Cordax.[19] [20]

Crasher was featured in the 1986 children's book Collision Course Comet - Robo Machine Featuring The Challenge Of GoBots. The illustrations of this book depict her in her white variant, not the black one used in the animated series.[21] 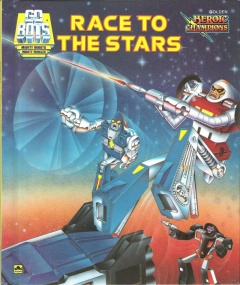 Cy-Kill, Cop-Tur and Crasher on the cover of Race to the Stars

Crasher appeared in the 1984 Western Publishing Company story War of the GoBots by Robin Snyder. [22]

Crasher appeared in the 1985 Western Publishing Company story Race to the Stars by Jack Harris.[23] 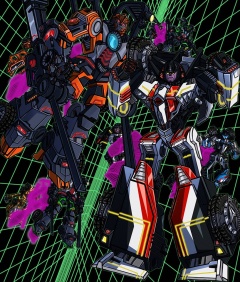 Deadlift, the Sweeps, Fracture and her armada in Echoes and Fragments Part 2

Crasher was featured in the 2016 Ask Vector Prime story Echoes and Fragments, set during the events of The Transformers: The Movie. The manipulations of the evil Gong and Sideways resulted in various GoBots swapping places with characters during the events of that film. Crasher took the place of Bombshell in the story. When the Renegades took over the Autobot Command Center, Crasher was one of the Renegades who took the controls. Cy-Kill ordered her to lock the defeated Ironhide in the hold. When Unicron reached an agreement with Megatron, Crasher was rebuilt into Fracture. She then returned to Earth under the command of Galvatron and attacked the Autobot and Guardian forces and helped destroy Command Center 33 and 09.[24]

Crasher appeared in the Transformers: Renegade Rhetoric episode 7-8 story "The Hawks of Space", where she helped defend the Renegade base on the dark side of the moon.[25]

Crasher appeared in the episode 9 story "Cy-Kill For President".[26]

Crasher appeared in the episode 14 story "The Alienapolis Five Million" working with Spoiler and Stallion.[28]

Crasher appeared in the episode 18 story "The RoGun Ruckus".[30]

Crasher appeared in the episode 24 story "Ladies Night" where she was part of a team of female Renegades sent to compete on the planet Amazonia IV.[31]

Crasher appeared in the episode 50 story "[[Chains of Do

Crasher appears in the 1986 Golden Press story The Sea Vaporizer. In the story Guardian Command Center is stationed on Earth's moon as Beamer plays games on the space scanner. An alert sounds and Leader-1 discovers the Earth is being enveloped by a steam cloud. He sends Guide Star to investigate. Guide Star discovers a beam of light that is boiling Earth's oceans and follows it into space where they discover the Renegade GoBot ship Thruster, but then contact with Guide Star is cut off. Leader-1 takes up the investigation, and Cy-Kill uses a space mirage projector to conceal his presence. Leader-1 works past the mirage to discover a space station where Cy-Kill, Crasher and Cop-Tur are using a giant lenses to focus the sun's rays into a beam to boil away Earth's oceans, leaving the planet uninhabitable by humans. Cy-Kill attempts to blast Leader-1 out of the sky, but Leader-1 is able to neutralize the beam with a blast of his own. Cy-Kill then sends Pow Wow and Crasher to attack Leader-1. They attempt to ram the Guardian, but Leader-1 avoids the attack causing the two Renegades to hit each other. Leader-1 frees Guide Star and deflects an attack by Cy-Kill, blowing out one of the Renegade leader's tires. The beam stopped, the oceans of the Earth are saved.[32]

Cy-Kill, Crasher and Pow Wow use an electromagnet to bring in the disabled Guardian Command Center while Scooter does a space age cross word

Crasher appears in the 1986 Golden Press story Ambush in Space. In the story the Guardians decide to take a vacation on one of the resort planets. They take the Command Center and their first stop on a refueling planet, but after taking off their engines conk out thanks to micro dust in the fuel placed by Cy-Kill. The Command Center is drawn to the planet Fintergand by an electromagnet operated by Cy-Kill. Once forced to land Pow Wow attacks Scooter, but his attack is deflected by a boulder thrown by Sky Fly. Cop-Tur attacks Leader-1 with rust rockets, but he tricks the rockets into following him to Cy-Kill. Cy-Kill gets hit by the rockets and rusts in place. Pow Wow attempts to ram Beamer, but Beamer flies out of the way at the last moment, causing Pow Wow to hit Odd Ball instead. Breez attempts to hide from the Guardians in a crater, but Guide Star and Sky Fly shoot "obmug" into the crater. The Guardian GoBots sing their victory song.[33]

Crasher appeared in the story "Scooter's Mighty Magnet" as one of Cy-Kill's minions.[34]

Crasher appeared in the story "La Busqueda" (The Search) from the Argentina GoBots comic #4.[35]

Crasher appeared in Lil Formers #93, "Fembots" by Matt Moylan, where she co-hosted a television talk show.[36]

Crasher’s toy was a re-release of the Machine Robo Porsche Robo figure. It was first issued by Tonka in 1983, in an authentic white Rothmans Porsche livery (of the 1982-87 factory team).
This color represents the character as they appeared when enslaved by the Overseers in "Chains of Doom".

From the outset the character was black/red in the cartoon, and by 1984 the toy was recolored to match Crasher's on-screen appearance. There was a variant of the stickers on this toy. One having a solid white background behind the "1" on the arms, the other having a red stripe above the white.
This toy was sold by itself and in a gift pack with Tank and Geeper-Creeper.

In 1993, the white version (with a new sticker sheet) was issued as "Sports Car" (the trademark "Crasher" now belonging to Hasbro) in Bandai's Robo Machines range.