Bruticus is the name of several fictional characters from Transformers series. He is sometimes called Bruticus Maximus or Predacon Bruticus.

In the Generation 1 continuity Bruticus is the combined form of the Combaticons Blastoff, Brawl, Onslaught, Swindle and Vortex. Sometimes Shockwave is also part of combination, serving as a weapon for Bruticus.

Bruticus is a successful merging of the minds of the Combaticons.[1] He can destroy his enemies with ultrasonic waves; he can smash through metal bridges with his arms alone. He uses Onslaught's powerful sonic stun-gun. He is noted for being graceful, fast and willing to follow orders. That is also his weakness, without orders he will often just stand around, doing nothing. Desptie this, the Decepticon leader wishes he had "A thousand more just like him." [2]

Bruticus first appeared in the episode "Starscream's Brigade" when Starscream ordered the Combaticons to merge and battle the Constructicons when Megatron had them merge to form Devastator. Although they are triumphant, they are knocked out when the Stunticons merge to form Menasor for a sneak attack.

In the episode "Revenge of Bruticus" the Combaticons attempt to get revenge on Megatron by using the spacebridge on Cybertron to collide the Earth to the Sun. Megatron, forced to work alongside the Autobots, had managed to defeat Bruticus. Seeing his great power, Megatron decided to forgive Starscream of his previous treachery by tricking the Autobots to think Bruticus was destroyed, when in reality the Decepticons reprogrammed the Combaticons to be loyal to their leader.

The Combaticons and their combined form made several other appearances, including a battle with the Protectobots and their combined form of Defensor and when Swindle sold the parts of his allies for money until Megatron threatened him to repair them. Bruticus and the Combaticons would go on to appear throughout the show's third season, including one bizarre occasion in which a seemingly more intelligent Bruticus appeared as Galvatron's advisor on Paradron while his components were seen separate from him.

Bruticus would also appear on several occasions in Transformers: Headmasters, though usually only in a minor role in battles involving other Combiners. Most notably, he was set to defend one of Scorponok's Death Towers, which led to a battle between him and Defensor in which he triumphed over the Autobot giant.

In the Japan-only anime OVA one-shot Transformers: Zone, Bruticus was one of the nine "Great Destron Generals" resurrected by the evil entity Violenjiger to acquire the mysterious "Zone Energy".

Dreamwave Productions' 21st Century re-imagining of the Generation 1 universe took its inspiration for the Combaticons from the original animated series, casting them as Decepticon prisoners who were reduced to protoform stasis because they were too dangerous to be released.

Onslaught, Brawl, Blast Off and Vortex originally appeared as part of Shockwave's attack on Iacon in the first War Within series. At the same time Swindle was with Starscream, Motormaster, Runabout and Runamuck when Starscream examined Laserbeak's data to see Megatron's data on the state of Cybertron.

Later, when Optimus Prime led a rebellion against Shockwave's domination of Cybertron in 2003, Starscream took the opportunity to form a power base, taking the protoform Combaticons to Earth and outfitting them with new alternate modes taken from an abandoned military base, then leading them in an attack on the Ark in order to acquire parts to make the Decepticon space cruiser, the Nemesis, spaceworthy. Confronted in battle by Brawn, Bruticus was caught in an explosion as Ratchet self-destructed the Ark, but he survived the conflagration, only to be knocked out by artillery fire from an incoming Autobot shuttle. After a battle with the evil clone, Sunstorm, Brawn opted to work out some of his stress on Bruticus's unconscious body, punching the gestalt about the head until his comrades yelled at him to stop. Bruticus would return, battling Sky Lynx for Starscream's amusement - until the Predacons appeared in their combined form of Predaking. The two gestalts battled as Starscream fled and Bruticus lost. The ultimate fate of the Combaticons in the Dreamwave universe was not revealed, due to the company's closure. 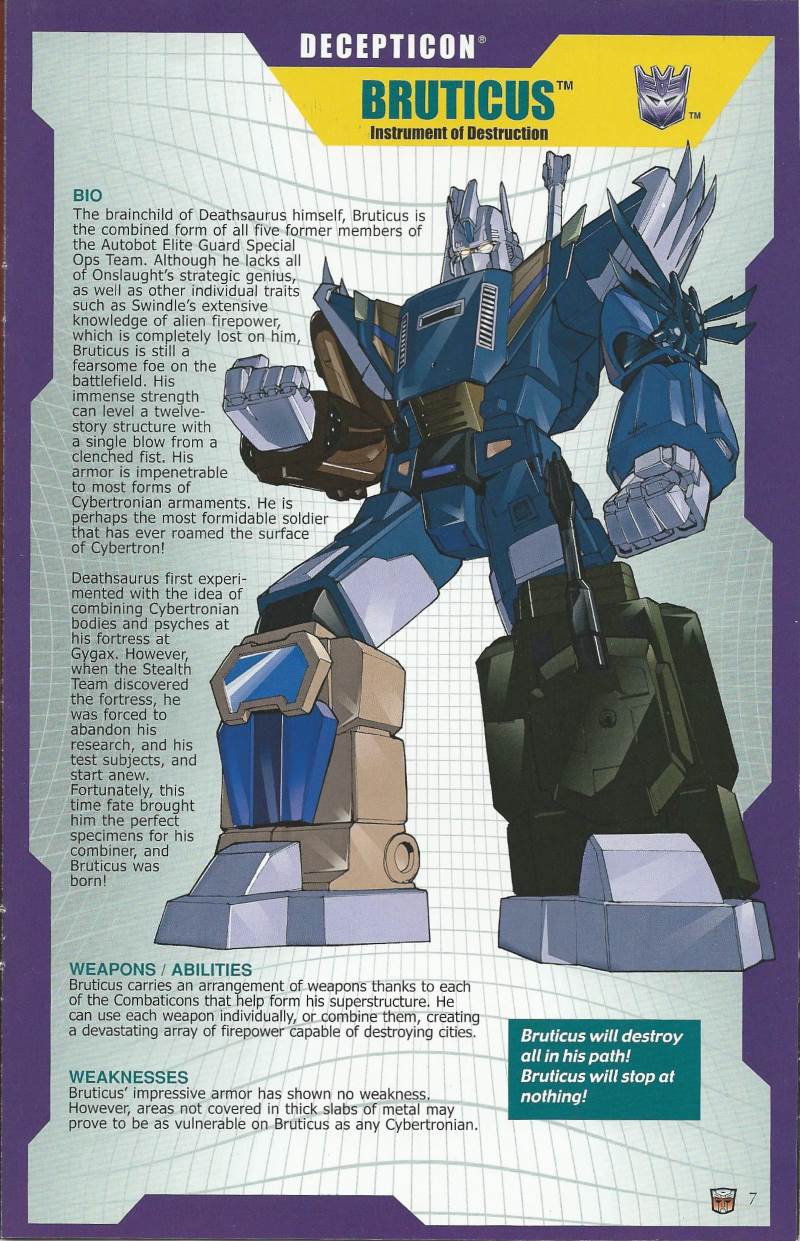 Combination technology was something the Decepticon Warlord Deathsaurus had long tinkered with, since the days of his fortress in Gygax. Although his early experiments were discontinued thanks to the Autobot Elite Guard, he remained interested in the idea, and eventually found the perfect means to implement it.

Metalhawk and his Strike Team were searching for Decepticons when they ran into a crazy "empty" who ranted about the coming of the "brute". They received a distress signal from Sentinel Major ordering all Elite Guard units to return base. When Metalhawk's team arrived at the base Ricochet told them of a Decepticon attack. Among the attackers are the Combaticions, but when Sentinel Major orders them to surrender, they combine into Bruticus and crush Sentinel Major.[5]

When most of the members of the Autobot Elite Guard confronted Bruticus they were nearly wiped out, with Bruticus killing most of the Guard. Dion was able to blind Bruticus, forcing it to separate into the Combaticons, but the Combaticons finished off most of the remaining Guard, including Metalhawk, who was killed by Onslaught. This left only Dion alive, buried in the rubble, and Thunderclash's team, which was off planet at the time.[6]

In the Transformers Manga #5 Galvatron and his Decepticons attacked the Prime Energy Tower. Galvatron ordered the Decepticons to form Menasor, Devastator and Bruticus and attack. Rodimus Prime counted this move by ordering in Superion, Omega Supreme and Defensor. Galvatron then ordered in Predaking, knowing that Sky Lynx was elsewhere and couldn't counter them. Rodimus ordered the Omnibots to attack Predaking's legs. Tripping up the giant he fell into the other Decepticon giants, winning the day for the Autobots.[7]

The Combaticons had no explicitly stated origin in Marvel Comics' Transformers series, but it can be safely assumed that they were given life by the energies of the Creation Matrix, tapped by the Decepticons through one of Bombshell's cerebro-shells implanted within Optimus Prime when the Protectobots were being created by the Autobots. The team's first mission saw Vortex being dispatched to scout the scientific facility responsible for creating the energy-generating device known as the Hydrothermacline, which Megatron and the team then attacked under cover of night, only to be met with opposition in the form of Optimus Prime and the Protectobots. Although both teams assumed their combined modes, facility staff member Ethan Zachary talked them into a different method of combat to prevent collateral damage - a virtual duel in the video-game realm of "Multi-World." The Combaticons were summarily defeated by the Protectobots and the game's digital inhabitants, but the contest ended in failure when Megatron cheated, forcing Optimus Prime to take an action that he would not in the real world, sacrificing the life of some of the game sprites. Believing himself to have cheated his own principles, Prime declared himself the loser of the game, and was destroyed. Unsatisfied with the victory, Megatron became increasingly paranoid, and severely damaged Brawl by crushing his head before surrendering to insanity and apparently destroying himself. [8]

Some time later, the Combaticons tracked down the Throttlebots, a group of Autobots who were newly arrived from Cyberton, and had taken up with Goldbug and Blaster, two Autobots who had rebelled against the tyranny of their current commander, Grimlock. This resulted in another clash with the Protectobots, who had been dispatched to track Goldbug and Blaster down, with both forces meeting in a used car lot. The lot's owner tried to talk the two groups into an auction over the Throttlebots, rather than a fight, but Onslaught (unsurprisingly) refused to keep his part of the deal and battle broke out, with the Protectobots claiming victory thanks to some help from Blaster.

The Combaticons soon returned, attacking the Protectobots in a train yard as they were escorting the captured Blaster back to the Autobots' base. Bruticus and Defensor battled and Bruticus was winning the fight, until Blaster tricked him into believing that he was on his side, and collapsed a set of power lines on him, forcing the Combaticons to disengage. To pay back a group of human children for their help in the battle, Blaster allowed them to affix a mode-lock of Blast Off, trapping him in space shuttle mode, who they then used to take a trip into space. They soon came under fire from the Autobots' spacecraft, the Ark, and were pulled aboard, but when the misunderstanding was resolved, Blast Off himself was imprisoned. Blaster and Grimlock then engaged in a duel on the moon, during which Onslaught led a massive Decepticon attack against the Autobots, while the Constructicons liberated the captive Decepticons, including Blast Off, from aboard the Ark.

A Generation 1 gift set of the Combaticons and their merged form of Bruticus. Recolored into Battle Gaia, as well as the various versions of Ruination (Baldigus in the Japanese series) in the Car Robots/Robots in Disguise series.

A recolor of Energon Bruticus Maximus in the color of the Generation 1 Combaticons. In addition, the individual Combaticons retain their Generation 1 names, now with Swindle and Blast off being a helicopter and tank, respectively.

In the Transformers: Robots in Disguise line, the Combaticons and their combined form of Bruticus were repainted as the Commandos and their combination of Ruination. A new character unrelated to the original Bruticus appeared in the toy line. He was a red, black, and yellow cerberus that is reportedly a holdover from the Beast Machines toy line. Cerberus was in fact intended to be his original name, but it was changed in an effort to avoid confusion with Cerebros, the component of Fortress Maximus.

Bruticus was a supporting character appearing in Fun Publications fiction "Gone to Far", a text-based story set on Transtech Cybertron. He attended the off-worlder uprising meeting planned by Gutcruncher. Another version of the character-going by his original name of Cerberus-appeared in Beast Wars: Uprising storyline.

Bruticus appeared in the TFcon 2009 convention poster by Alex Milne in the form of his Universe' Ultra toy.[10]

A new mold originally planned for release in the Beast Machines line; it has not yet been reused.

A redeco of of Cybertron Ultra Scourge.[11]

The Universe redecorated version of the Energon Bruticus Maximus figure was repackaged and sold exclusively at Target for the toy line tied in with the 2009 live-action film Transformers: Revenge of the Fallen.[12]

In the Prime continuity Bruticus is the combined form of the Decepticons Blastoff, Brawl, Onslaught, Swindle and Vortex.

An SDCC 2012 exclusive Bruticus gift set. Colored to match be more Fall of Cybertron game accurate in colors than the retail release.