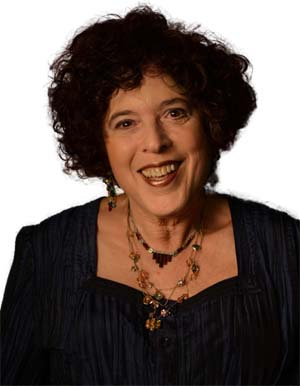 Dr. Barbara Becker Holstein obtained her Ed.D from Boston University. She is a licensed psychologist in private practice in New Jersey and Massachusetts, with her husband Dr. Russell Holstein, also a psychologist. She specializes in positive psychology as well as other issues associated with girls and women.

Early in her practice she realized that the medical disease that most therapists were using was insufficient to assist people in the treatment room. This medical model, which had been used for many years, focused on the problems the patient brings into the treatment room and attempts to fix them. She realized treatment should also focus on what is right about the patient as well as the patient's talents and strengths. She began to develop Workshop materials and treatment alternatives for helping people discover what was positive about themselves.

Several years before Positive Psychology had a formal title she was actively behaving as a Positive Psychologist, in her practice, in workshops and other ways such as media. The result was her first book, The Enchanted Self A Positive Therapy. This book well-received both publicly and by other psychologists. The book explains how to move away from the disease model towards what then came to become known as positive psychology. Her book written for therapists as well as women, is and easily understood book with many exercises as well as insights into what makes up finding and beginning to use one's full potential.

During the same early years her first website appeared. Called The Enchanted Self, it was one of the first websites focusing on women and their potential. All of the stories and exercises were designed to help women reach for that potential, find meaning in their lives as well as joy, happiness, and a sense of success. It is still in existence to this day. Throughout the years it has continued to offer inspiring stories, recipes for enchantment, interviews with women and girls, films, books, and much more.

As positive psychology is now established throughout the entire country, Dr. Holstein continuously develops more ways and techniques in positive psychology, utilizing the basic concepts she feels are most relevant. From the 1990s through 2015, these included radio shows, television appearances, newspaper articles, newsletters, all in pursuit of the written word.

In the mid-1990s she became a filmmaker. As an entrepreneur and a visionary, she developed a technique called Selfie films, in which the actor not only played a role, but would also do her own filming on a smartphone. Smartphones were not used in this way at this time When Dr. Holstein created and directed her first film, she saw smartphones as another entryway to an amazing world in which people of all backgrounds and educational levels could become filmmakers. Subject might include interviewing family members, catching something interesting where they lived, keeping a diary or just having fun with their phone. Dr. Holstein's films have appeared around the globe, in over 100 festivals, and have been regarded as a masterful way to engage with others to find common ground

In the last few years Dr. Holstein had another vision in which she realized that young people do not have enough voice - ways to express themselves, feel satisfied and to get in touch with their potential to change the world as opposed to just feeling rage, anxiety or disappointment. This resulted in an ongoing project called The Selfie Project. One component of the project is podcasts in which youngsters, as well as experts and parents, can offer insight, voice frustration, share successes based on issues that might be disturbing or uplifting. The Selfie Project has also gone around the world in festivals, and she now hopes to make it a series, in which young people can make their own selfies privately. This allows them an opportunity to be totally honest and then share those selfies with other teenagers, young people, and experts, so that the final result is a project with the potential for real change with experts and other participants in a roundtable format.

For two years the pandemic forced many of us into isolation. One of the ways Dr. Holstein helped to overcome the isolation was to begin to make take some scripts, originally written to be half-hour films, transforming them into something she calls Zoom dramas. In these filmed episodes, actors work from the comfort and safety of their own home and interact with other actors on the zoom platform. The drama's cover the conflicts and difficulties of relationships in the real world and are made available to the public.

THE ENCHANTED SELF as a breakthrough in treating patients in therapy. Joy is the re-invention of oneself in positive ways. Writing THE ENCHANTED SELF, A Positive Therapy gave her a chance to share with the public how psychology has spent too much time focusing on dysfunction, and what went wrong - often using memories to augment this focus. Mental health and a sense of joy more readily appear when we focus on the positive reinvention of ourselves. To do this a clinician and/or anyone can practice ways of using the past to access positive information - our lost potential, our dreams, our proud sense of the story of our lives. There are so many marvelous things about each and every person.

In her book, Dr Holstein teaches readers how to go about recovering the best of themselves. This paradigm shift, looking for the positive rather than the negative, results in happier psychotherapy, often shorter psychotherapy and a more educational therapy where the client really learns to recognize and develop her talents, strengths and what gives her pleasure. Dr. Holsteins is often thrilled and shocked when she realizes how much she is able to learn from her clients. They have wisdom, humor, coping skills, great abilities to nurture and love others, they survive incredible obstacles. I am so lucky to have been able to talk to so many wonderful people and get a chance to learn from them as hopefully they have been able to learn from her.

Seeing one's life as an experience of Enchantment - a chance to bring pleasure and joy into your life and those who you are with - is what writing and working on THE ENCHANTED SELF, A Positive Therapy has reinforced for Dr. Holstein. She hopes it is part of everyone's journey of growth and joy also.

She has chosen many pathways to help people move forward in retrieving their own paths to a bounteous life. One of those paths are books she has written:

An inspirational book entitled 'Recipes for Enchantment, The Secret Ingredient is YOU!'

Another that provided appropriate psychotherapy when necessary.'THE ENCHANTED SELF, a Positive Therapy'

Easy Read Books on Happiness such as 'Seven Gateways to Happiness: Freeing Your Enchanted Self' And a book discussing the Spiritual Pathway to Happiness, 'Delight, There Comes a Time in Every Woman's Life for Delight!'

Other paths she has taken as a positive psychologist include a stage play titled "The Locket". She has written, directed and produced a wide variety of cutting edge films, based on all of the same principles. The pathway with her films is often very different. Stories are experienced in just a few minutes yet can make a very strong impact. Her films have won numerous awards, placements and have been selected around the world at film festivals, over 100 times as of 2021.

Some examples of her films include 'The Truth, a Short Film', in which a young girl shares from the depths of her heart her frustrations, hurts, joys and delight with the audience. Because she has done her own filming of herself as she talks into her smart phone there is an immediacy and connection with the view achieved that might have taken many hours in a book or perhaps never achieved in another type of film where the crew is always around the actress. This style of film making has been called Selfie Films. It is a technique Dr. Holstein has developed - one that is particularly successful at connecting audiences with young actors.

Another Selfie Film is 'Falling in Love, A Coming of Age Selfie Film'. The Selfie smartphone technique made this film a winner at film festivals and brought tears of laughter and discussions of feelings for the many of the viewers. It is a great film to share with family members of different ages and stages of life.

Always thinking about how to give people a voice, one of her films 'The Selfie Project' is a good example of her continued outreach. This film, a documentary, demonstrates how youngsters can share their feelings, attitudes, concerns and hopes for solutions, utilizing two important methods. They can produce their own selfie films where they share what is on their mind. Then in round table fashion with youngsters and experts they can share potential solutions to problems.

Her ongoing work with THE SELFIE PROJECT includes podcasts and selfie films in which youngsters share their feelings, ideas and solutions about critical subjects such as the Pandemic and the environment.

All of us need tools and resources to try to stay uplifted. Dr. Holstein continues to develop never or seldom seen before such as Vella novels, her first being: 'MORE SECRETS MORE MAGIC' designed to engage the audience while the characters demonstrate resilience,confidence and healthy emotions, scripts based on positive psychology work with couples presented as zoom drama performances, filmed in various locations simultaneously via Zoom. Three performances are available on her Vimeo channel, Roku and Amazon Fire TV. These include 'Life is Complicated', 'I Had an Affair or did I?' and 'I Had an Affair with my Husband'. All touch upon the emotional needs and frustrations of being in a relationship.

Dr. Holstein hopes to continue with many more inventive ways of helping kids and adults everywhere enjoy good mental health, purpose and meaning in their lives.

More information on the above can be found at the following links:

The Truth A Short Film:

Hang On To Your Shorts Film Festival - Official Selection- May 2017

Shown March 1 1018 as one of 6 outstanding women’s films at the Behane Center in Jersey City, for Women’s History Month by Golden Door International Film Festival.

Falling In Love A Coming Of Age Selfie Film:

"Hang on to Your Shorts!" Film Festival Selected

Truth is Stranger Than Fiction:

"Hang on to Your Shorts!" Film Festival - Selected

The Medium, A Coming of Age, Selfie Film:

Selected to be screened at the Young Filmmakers's Screenings in Manhattan in early March, 2019.

Selected to be screened at the Northeast Mountain Film Festival 2020

Selected to be screened at Hang On To Your Shorts Film Festival in Asbury Park on May 5th 2019 and up for the Best Documentary Award.

Selected to screen online, during Toronto Lift-Off Film Festival 2019! Voted one of the top ten films.

Conflict and a Bit of Magic, A Coming of Age, Selfie Film:

Selected to be screened at the Northeast Mountain Film Festival 2020

Seven Ways to Help Your Family Recover From the Pandemic

Conflict and a Bit of Magic

Secrets: Diary of a Gutsy Teen

The Truth: Diary of a Gutsy Tween

The Truth: I'm A Girl, I'm Smart and I Know Everything

Secrets: You Tell Me Yours, I'll Tell You Mine - Maybe

Recipes for Enchantment, The Secret Ingredient is YOU!

THE ENCHANTED SELF, a Positive Therapy

Seven Gateways to Happiness: Freeing Your Enchanted Self

Delight, There Comes a Time in Every Woman's Life for Delight!

A Selfie Film: Falling In Love

Next Year In Jerusalem: Around Every Corner, Mystery and Romance

Next Year In Jerusalem: Romance, Mystery and Spiritual Awakenings